Patterned after the NCAA Division I Men’s Basketball Tournament, and presented in conjunction with media partner Billy Penn, Beer Madness will feature 32 total breweries from around the region and country, all seeded by their years in business and separated into four geographical regions, including: Philadelphia Suburbs Region, Philadelphia Region, Northeast Region and “Rest of United States” Region.

A beer-savvy Selection Committee, including PLB Board Members, local bar owners and managers, PR and marketing professionals, writers and editors and head brewers, selected the ultra-competitive Field of 32, with individuals taking into consideration all factors of what makes a successful brewery and where to position them on the bracket. The committee meticulously researched each brewery chosen, without bias or prejudice. 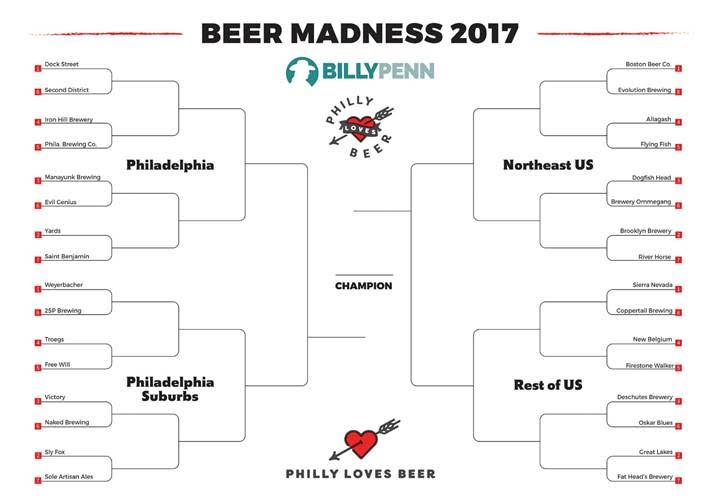 “We wanted the bracket to highlight a strong and diverse mixture of up-and-coming local breweries, along with well-established national breweries that have supported Philly Loves Beer and Philly Beer Week during our 10-year run,” says Executive Director Kristine Kennedy. “The talent in each region is immense, and whittling the list down to only 32 breweries was extremely difficult.”

“Billy Penn has been running fun bracket competitions for a couple of years now, and narrowing down the field is always the toughest part,” agrees Billy Penn Culture Editor Danya Henninger.

Voting begins on March 13 (on both PhillyLovesBeer.com and BillyPenn.com) and includes six rounds, taking the field down from 32 breweries to an eventual champion announced on April 7, or National Beer Day. The Field of 32 will include the following (listed here in their respective regions, with seeds in parentheses):

Established by Philly Beer Week (PBW)  in 2014, this marks the 4th annual edition of Beer Madness. During that span, a local brewery has won the event each and every year, including: Yards, in 2014; Dogfish Head, in 2015; and Evil Genius, in 2016. In previous years, the Beer Madness bracket has pitted flagship and seasonal styles against one another, instead of the brewery as a whole. Please check social media often for updates.