The story, photos by Sharon Kozden

Phoenixville, Pennsylvania - 'Twas the week or more after Christmas, and someone still deigns to feature Santa Claus snaps. Gasp, and but why? Well … if the lights on homes can still twinkle brightly into January (making people and PECO happy), and the evergreen trees aren't yet a voluminous curb-tossed presence, then surely a cute write-up about our collective love of animals can warrant publication. Besides and despite Mister Holly Jolly's involvement, pets were the star attractions. 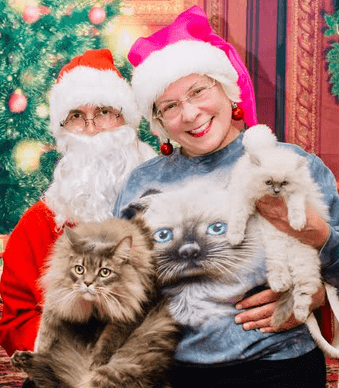 Maddie's Castle in Phoenixville On December 9th, the North Pole-residing Big Kahuna landed at Maddie's Castle in Phoenixville. He was there to pose with people and their pets, who came out to support Noah's Ark Rescue Project (NARPS), a non-profit animal welfare organization "dedicated to rescuing, rehabilitating, and rehoming animals in need." However, their efforts do not stop there. NARPS also is "committed to educating the public on important issues in animal welfare." Forking over ten bucks for such an admirable cause was a paltry price to pay for the many folks streaming into Maddie's Castle with dogs and cats for their holiday memory-preserving photographs.

Animals of varying sizes and breeds lap-sat, expressing enthusiasm, annoyance or tolerance for owners' whims. I toted my cats, Kaiaulait (Kai-Kai) a Maine Coon along with his sister, Belle du Joule, a blue-point, a doll-faced Himalayan kitten that resembles a snowball. She was so tiny and cute that many cooed over her and wanted to scoop her into their arms.

The establishment's name is a mix of two of the Klein family's pets that have passed: "Maddie (a Pitty-Bulldog mix) and Castle, the gray cat who loved Maddie." The current Queen of the Castle also is known as Maddie.

Amid the event's hustle and bustle, Maddie slept curled in her fleece bed or checked out the action when the spirit moved her. One of Maddie's Phoenixville claims to fame is that she minds the shop overnight (guard cat on duty!), perched on high and typically a-snooze in her body-conforming fleece pod. What's genuinely charming is that she's positioned front and center in the store window for all passers by to admire. Yep: that's Maddie, one super-threatening guard cat. Borough regulars and cat fanciers such as myself, regularly nip by to gaze and wave on the occasions when she's awake and alert. Visitors to Phoenixville, meandering along Bridge Street are happily surprised and taken by the notion of "Who's that Maddie in the window?"

Maddie, the resident cat that sleeps in the window.

The shop itself is a treasure trove of all manner of imaginable items for animals, running the gamut from magnets, cards, toys, collars, leashes, bowls and more. Some of the high-end treats had me salivating. Shoppers will also find competitively priced quality food brands.

C'mon in and visit Maddie, while supporting local small businesses. Diane and Jeff Klein (along with son Grey) will warmly welcome you, and if you're lucky, Maddie will be receptive to you petting her royal, long-haired self.