Ponte Vedra Beach - The Metro Diner is a cute neighborhood chain serving up a traditional American breakfast & lunch/dinner menu in an incredibly welcoming atmosphere. Recognized as Jacksonville’s original diner, The Metro surprised me and ended up being one of my new favorite breakfast spots in Florida.

The Metro is can only be described as a scratch kitchen, with one-of-a-kind recipes and extremely creative twists on old classics. Known for its southern breakfast, inviting service and fantastic food, The Metro is actually a go-to eatery for locals, visitors at Ponte Vedra Beach, but be warned this place gets packed for breakfast, so I suggest you get there early. For golfers, this is a great stop for breakfast, lunch or dinner before or after playing a round at famous TPC Sawgrass Golf Course.

We stopped in for breakfast, and with so many great options to chose from, we finally decided on their famous Fried Chicken and Waffles, a half a fried chicken and on-top of Belgian waffle smothered in sweet, strawberry butter and served up with a sweet and spicy sauce. Along, with the classic Corned Beef Hash with Poached Eggs & Toast, a slow-roasted corned beef chopped up with diced red-skinned potatoes and grilled to perfection along with two poached eggs and toast. Both dishes were out of this world, with portions too big to finish. 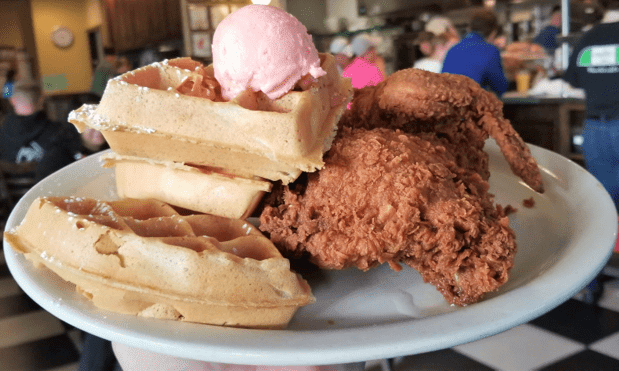 The lunch and dinner menus, offer up of a variety of soups and sandwiches as well as diner staples including the meatloaf, which earned top reviews from culinary chef Guy Fieri and host of the Food Network’s “Diners, Drive-ins, and Dives.”

PLAYERS Championship Tickets and Guide - This March, just like every year, tens of thousands of spectators are going to line The Stadium Course at TPC Sawgrass for the 2019 PLAYERS Championship. Ever since its conception in 1974, alongside Jack Nicklaus' historic win over J.C. Snead, THE PLAYERS Championship continues to be one of the PGA TOUR's most sought after titles. Shortly after his victory at the inaugural event, Nicklaus proceeded to dominate the title every other year up until 1978. Nicklaus continues to be the sole three-time champion of THE PLAYERS.