- Attending prom is a right of passage for anyone growing up, and a magical night filled with dancing, dressing up, and having fun. In order to ensure that Khmaia Downing could enjoy herself and be included in all the festivities, her mother Roslyn Talley came up with a plan.

Police Officer Roslyn Talley, who is assigned to the Philadelphia Police Academy as an Instructor for Recruits, and Project Development Specialist for Community, had been thinking about putting together a prom for people with special needs for over a year. 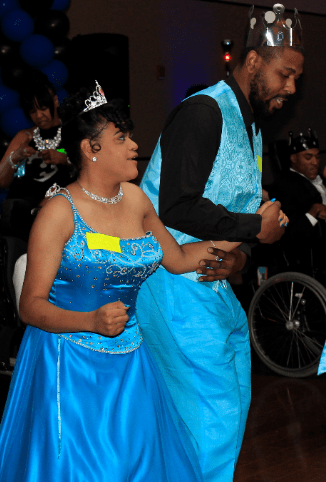 Special Needs Prom In February, she began turning that thought into reality. Roslyn wanted to give all people with special needs a chance to take over the dance floor and enjoy a glamorous prom night.  So she contacted other parents of special needs children to find out if they would attend. The parents replied with a resounding ‘yes!’. As a result, Ms. Talley and her fellow police officers volunteered their time, and organized a prom that her daughter Khmaia, and anyone else with disabilities, could have a better experience when they went.

“The reason why I started this is that it was a thought from me, because of my daughter. She is my biggest inspiration.  And I did this because a lot of times when kids go to their regular proms, she is part of an inclusion. And what they do is kind of dance alone in the corners, and I hate to see that.  I’ve always seen her [Khmaia] do that. And I didn’t want to pay for something that is so big, and for her not to have a good time,” explained Roslyn Talley as to what inspired her to begin organizing The Special Needs Prom.

According to Roslyn Talley, more than 150 special needs people and their aides were present at The Special Needs Prom Night being held in The Michael G. Lutz Room at the FOP lodge in North East Philadelphia and was hosted by The Philadelphia Police Department and Friends.

Walking in, it appeared as any other prom; there was a photographer, videographer, a DJ playing popular dance music, and a buffet. However, there were two additional exceptions to this prom that made it different: all the attendees who have special needs were given a crown, and there were two celebrities who came with the intention to put smiles on the faces of those same kings and queens of the prom.

The two celebrities were former Eagles players; former Defensive Tackle, Hollis Thomas, who currently works as a sports talk show host on Sportsradio 94WIP in Philadelphia, and former Linebacker Ike Reese, who is currently a co-host of the Marks and Reese show on 94WIP attended the event.

Both former Eagles players expressed that they felt honored to have been invited to attend the prom, and hoped that their presence would bring more awareness to the cause.

“I don’t know anybody who doesn’t have a family member that is dealing with some type of disability, whether its physical disability or mental disability, so this is something that touches you whether you have family here or not,” Ike Reese stated, referring to his own family members who have disabilities but were not in attendance that night.

The turn-out and what it meant to everyone who was invited was reflected in the happiness seen on all of the guests faces. And the dance floor was packed with all the Kings and Queens, some of whom got on the floor to break-dance.  When asked if this will be an annual event, Roslyn Talley said that she hopes so, and she is already thinking about what to do for next year.