Philadelphia, PA - I have been happy in my kitchen this Fall cooking with (and drinking) hard cider from my local cidery, Dressler Estate in Downingtown, PA. I love having the opportunity to work with local businesses whose products I’m passionate about on projects that encourage others to support local and share great food and drink! I was fortunate enough to score an invitation to a beautifully orchestrated dinner on Sunday night at Bottle Room where Chef Tim composed four courses highlighting four different styles of Dressler Estate’s hard cider.

The evening started with the first course of Bacon-wrapped Scallops with Crispy Black Pudding, Caramelized Onions, and Apple Butter, locally sourced from Vollmecke Orchards. The creamy scallops beautifully complemented the nutty sweetness of the caramelized onions, the smokiness of the bacon, and the mild acidity of the apple butter with the black pudding adding a lovely crispy texture. The effervescence of Dressler’s Modern Sparkling that was paired with it refreshed the palate with every sip so that each note of the dish could be distinguished on its own as well as for in concert with every other complimentary flavor. 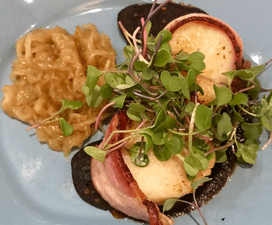 The next course was a refreshing and well-balanced Spinach and Pear Salad with baby spinach, juicy pear, pomegranate seeds, walnuts, gorgonzola, and a white balsamic vinaigrette paired with Dressler Estate’s Modern Still. The clean acidity of the cider was a perfect foil to cut the pungency of the gorgonzola, and its fruitiness enhanced the pleasing pops from the juicy pomegranate seeds.

Moreover, then…there were the Pork Belly Tacos paired with Dressler Secret Stash, which was the most exciting course of the evening! The Secret Stash is an experimental cider that was fortified with brown sugar, giving the cider a luxurious warmth and taste similar to barrel-aged spirits. This was a natural marriage with the richness of the crispy pork belly, avocado, pickled red onion, queso fresco, cilantro, and ancho chili roasted pineapple—which I am now obsessed with and will need to experiment with in my kitchen the next time I score some fresh pineapple!

The final course was a fantastic dessert of Apple Tart with Vanilla Bourbon Ice Cream served with Dressler Estate’s Whiskey Barrel-aged Cider that has more subtle and vanilla notes that paired perfectly with the ice cream and the apples. Until now, this barrel-aged cider has been available on tap, but operations are currently underway to make sure that it will be available in bottles in time for the holidays!

If you are ready to get your cider on, you’re in luck as you can catch the Dresslers at a variety of fun events at Philly Cider Week which starts today and runs through Halloween! Make sure that you’re up on the best local food events in the Philly Burbs by following Optimistic Kitchen on social media AND support local by following your favorite local businesses, like Dressler Estate & Bottle Room.