- The chips were all down in South Philly at Xfinity Live! as local restaurants and chefs competed to see who would make the best burger in town.

There were two ways to win, either by winning the Judges Choice or the People’s Choice, along with other categories; the Philadelphia Burger Brawl also held a Taco Takedown and Cocktail competition. 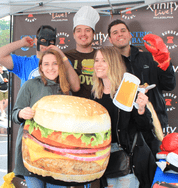 Burger Brawl 2018 FunThe first-place winner for the Judges Choice Burger Brawl Winner was Northeast Sandwich Co. (NESco) with owner Kris Serviss’ NesCo Patty Melt.  A devilishly messy and delicious burger with a Rueben twist.  One bite into this burger and the thousand (and one) island dressing dripped down your cheeks, as the coleslaw and pork and beef burger all tantalized my taste buds.

As for the Judge’s Choice Taco Takedown Winner, Ripplewood Whiskey & Craft reigned supreme with their Tongue and Cheek Taco made with braised veal tongue and a beef cheek marmalade on a corn tortilla. I did not know what it consisted of when I bit into it, but my eyes opened in surprise with how delectable the taco tasted.  It had a great combination of flavors as a sweet, savory sample hit my palate.

To my misfortune, I can only eat so much and so I was not privy to tasting what the People’s Choice winners had created.  However, I’m sure that the Taco Takedown People’s Choice Winner, El Vez, made a scrumptious taco—as I have enjoyed patronizing their restaurant several times on my own.  I’ve always liked their food offerings, and so I am certain that the El Pastor Taco, made with Smoked BBQ, Morita Chile, Pineapple was delectable. 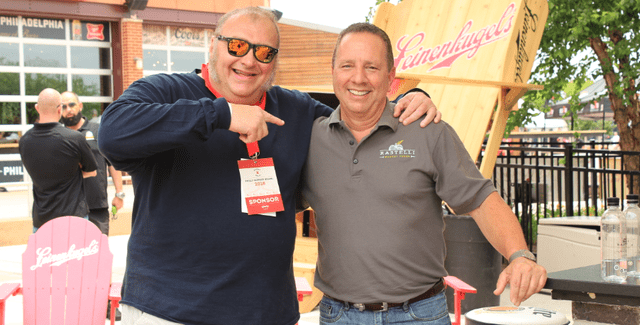 Ripplewood Whiskey & Craft took home another award, causing the group to react ecstatically as their name was called a second time.  I was witness to their reaction as I had followed them for an interview, which stopped abruptly so they could run up to receive their 2nd award for their Makers Mark Cocktail in the Cut-throat Cocktail Competition.

The real winners in all of this are the FUND for the School District of Philadelphia (the FUND) as the Philadelphia Burger Brawl was created to benefit the FUND, which allocates fiduciary means to under-served schools, bringing technology-based learning programs to those schools.  If you would like to learn more or to donate to the organization, please go to http://thefundsdp.org/.