Philadelphia, PA - You might have noticed a delicious new local vodka has been stocked at your favorite bars all over the city. Well let us ease your curiousity and tell you all about how this August 2016, Fishtown became home to Stateside Urbancraft Vodka and its Federal Distilling Room. 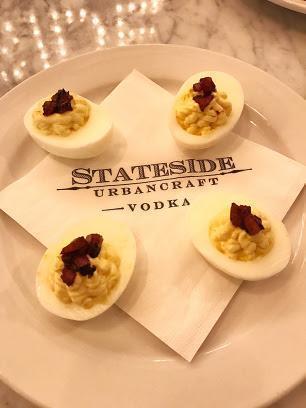 We stopped by FDR to chat with the great minds behind Stateside Vodka. FDR is a full service cocktail lounge that is conveniently attached to the distillery. Stateside Vodka is naturally 100% gluten-free since its made with corn and 7x distilled. There is no added sugar (which means no hangovers!) What is great about FDR is they offer a whole list of custom cocktails made with Stateside Urbancraft Vodka while also featuring drinks made with some of your other favorite spirits. Beer and wine is also available.

Additionally, there is a menu of light bites and bar snacks offered. Guests can enjoys tours of the distillery each week on Thursdays at 7pm, Fridays at 7pm, and Saturdays at 1pm, 3pm, or 5pm. Sunday hours and brunch bites will begin in February 2017. FDR also offers plenty of seating to enjoy panoramic views of the distillery floor through large glass windows while sampling some homemade cocktails.

Stateside Vodka and FDR share a common theme of being beautiful, modern and simple. The cocktail lounge is a dimly lit atmosphere decorated with Edison bulbs, reclaimed wood, and a large elk head which invites many questions from guests. We recommend every guest take advantage of a tour to learn more about this custom-designed vodka production facility.

Philadelphia is a town with a rich and rambunctious past. It is a city that created it’s own destiny. Stateside Urbancraft Vodka is an ode to our proud and colorful history. It is a tribute to those who have made this city great for generations. It is a promise to our customers that we will never forget what being from the neighborhood means. Finally, it is a declaration of our passion as distillers- Never stop inventing. Never stop improving.

Stop in and enjoy their delicious cocktail list, each signature drink using Stateside Vodka and some featuring unique infusions only offered at FDR.

As we drank our way through the cocktail menu we couldn’t believe how delicious everything was. The clever drink names make it hard to resist ordering just one. We loved how the fresh infusions, quality syrups, and house made juices complemented the smooth and clean notes of the vodka. If you can’t make it in to FDR, be sure to check out Stateside Vodka on display behind the bars at WM Mulherin’s & Sons, Wahlburgers, Hugo’s Frog Bar at Rivers Casino Casino, Ocean Prime, Del Friscos Double Eagle Steakhouse, Harvest Seasonal Grill, Bar Hygge, and more. You can also buy Stateside at FDR or in 170 Pennsylvania liquor store and 110 New Jersey liquor stores. 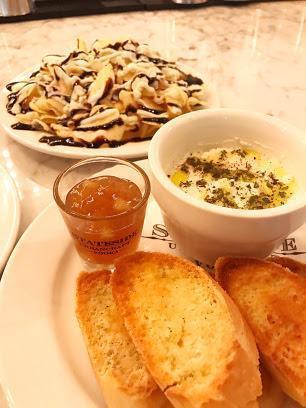 Of course we did work up an appetite, can you blame us? We started off with some snacks before taking our distillery tour. The Deviled Eggs with glazed sausage and caramelized onion are a very popular dish. And we can never resist something cheesy so we also tried the Glazed Kettle Chips with balsamic drizzles and blue cheese crumble, as well as the House Made Ricotta with apple jam and toasted crostini.

We spoke with Jenna Silverman about the story behind Stateside and were very surprised to hear that Matt and Bryan Quigley did not come from a long family lineage of vodka distillers. Their story began with a simple question, “Do you want to start making vodka? Yes.” It was about 5 years ago they started off experimenting in their parents basement.

We scraped together every last cent we could and in no time had the makings of our very own distillery. This is where Stateside Vodka truly began. Over the months, we tweaked and perfected our recipe until we had something we knew was special.

Unfortunately, their father was not as thrilled about his home being used to distill vodka, so their little test lab was shut down. They didn’t give up though, sending some samples off to Michigan State, the brothers got the invitation to join a summer program where they learned more about distilling.

Winter of 2014 brought an introduction to the president of a globally prominent liquor company and a private contract for work in Bielsko-Biała, Poland. In the highly competitive landscape of super premium vodka, all these brothers did was practice and practice often. When returning to the US they sought out investors and were introduced to Clement Pappas, the former CEO of a massive juice manufacturing company and his brother Zachary who turned into their angel investors and joined the team. And just like that, Federal Distilling and Stateside Vodka were born. The goal is simple, Stateside Urbancraft Vodka is concentrated on doing one thing and doing it well.

When asked what makes their vodka great, Matt says “It’s the taste component. There’s a lot ...to competing in the vodka industry; it’s really a fierce battle... The first thing you will do is qualify if it’s an attractive package, so it’s package design. Then you’re going to look at the price and compare it to other vodkas. And then you’re going to taste it. It’s all three that are going to determine if it’s going to move and we think we’ve hit them all — we’ve won awards for packaging, we’re priced competitively to the Ketel and Tito’s, and the taste component, we go to great lengths in the distilling to create a vodka that has a great taste profile. You can drink it on the rocks with no problem at all. And even the water quality — we have spent years on water.”