Philadelphia, PA - The crowds outside this storefront on Market Street may already give it away, but if you don’t already know, we’re here to tell you the whole story behind some beloved Philly cheesesteaks. Since opening in 1999, Sonny’s Cheesesteaks has been serving up cheesesteaks to hungry Philadelphian’s. 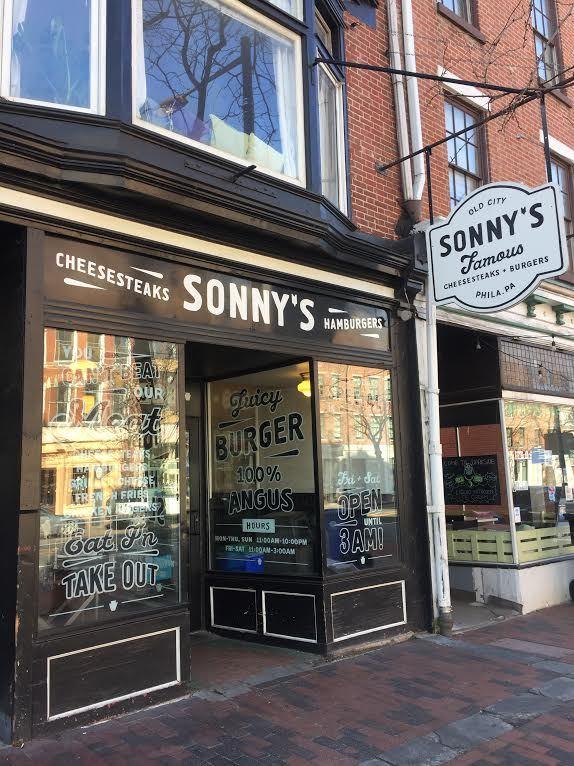 Located in the heart of Old CityBut it wasn’t until 2014 that this shop really got put on the map when Alan Richman from GQ Magazine, named it his #1 favorite cheesesteak in Philadelphia, “What a combination—wonderful cheesesteaks and attentive service. That’s almost impossible to find.” Whenever someone is looking for a cheesesteak recommendation, we don’t neglect to mention Sonny’s in Old City.

Located in the heart of Old City, this little restaurant has that butcher shop, vintage, neighborhood feel, where you can watch your cheesesteak as it’s made. Their sliced rib eye is fried in small batches in its own juices, rather than in oil, giving it a healthier spin on your traditional cheesesteak. (But who are we kidding, we’re not going here to maintain our diets). Served on an Amoroso roll, every bite is filled with the perfect amount of cheese, steak, onions, and roll.

Owner, Kevin Bagsby started working at Sonny’s in 2001 as a cook. At the time he was Temple student whose only restaurant experience was from working in a pizza shop. He ate a lot of cheesesteaks at the shop and soon began Brazilizian Jiu Jitsu which helped him lose 40 lbs. The shop has won various awards since Kevin started working there, including Best of Philly’s Best Cheesesteak in 2001. The shop underwent some renovations and new branding in 2013 giving them the iconic black and white logo they have now. 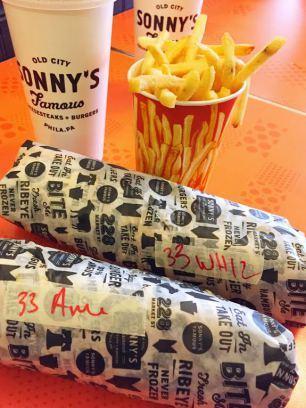 The interior of the restaurant is classic black and white walls with bright orange table tops. And the people behind the counter never get offended if you forget to order yours “whiz wit”. Don’t worry if there’s a long line out front- it moves fast, and you won’t be waiting for long. We have never waited longer than 5 minutes for a cheesesteak, and that includes the time we went here at 1 am on New Years Eve, and ordered 4 sandwiches and cheese fries. (If you aren’t already aware of this fact, late-night cheesesteaks are the ultimate hangover cure. Don’t believe us? Try it.) 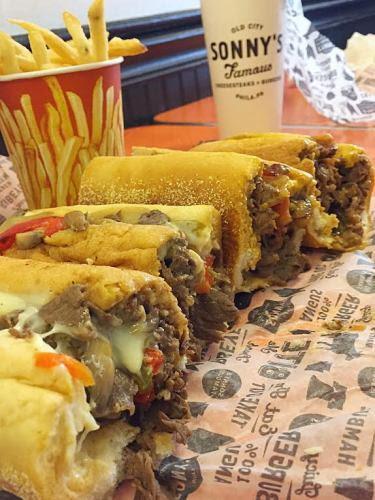 The Sonny’s Famous includes fried onions and Cheez Whiz. The steak is the one recommended to tourists at the counter. Sonny’s skips seasoning the meat, cooking the steak in its own natural juices, stuffing the meat in a soft, fresh-baked Amoroso roll, and topping it with fried onions and, of course, a healthy helping of Cheez Whiz.

If whiz isn’t indulgent enough, try Sonny’s Bacon Cheesesteak for the ultimate is salty cheesy goodness. They even offer Chicken Cheesesteaks which are made using chicken tenders marinated in Italian dressing. They even have a Veggie Cheesesteak, complete with peppers, mushrooms, onions, lettuce, tomatoes, and marinara. This shop doesn’t just serve cheesesteaks either- why not try their Grilled Cheese, a delicious Burger made of 100% Angus beef on a brioche roll, Mozzarella Sticks, Chicken Fingers, or even some crunchy Onion Rings. Rotating specials include Jalapeno Poppers, Fried Pickles and Fried Green Beans. Sonny’s menu has something for everyone. 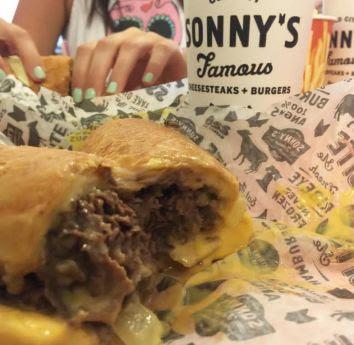 Keep your eye out for UberEATS delivery. You can also cater from Sonny’s, as well as partake in special events with local student groups – Sonny’s works closely with school groups, tour groups, and business groups to offer discounts and dining packages. They suggest making a reservation in advance (click here). And, you can always show your support for our favorite spot with a souvenir t-shirt, available for $15.