PHILADELPHIA, PA — Post Brothers today achieved a major milestone in the preservation and renovation of one of Philadelphia’s landmark buildings, announcing that five retailers have signed leases at Hamilton Court, the historic apartment complex in the city’s University City neighborhood.

The leading-edge real estate company is in the process of making dramatic upgrades to Hamilton Court, which was one of Philadelphia’s first apartment buildings when it was constructed at 39th and Chestnut streets in 1901. The renovations include the conversion of vacant ground-floor space into modern commercial retail spaces, which will be occupied by five dining establishments:

“The decisions made by these restaurants and cafes to bring their established dining concepts to Hamilton Court further validates our decision to preserve and heavily invest in the modernization of the property,” explained Michael Pestronk, CEO and co-founder of Post Brothers. “Their presence will have a profound and immediate impact on University City’s dining scene, adding to the walkability and vibrancy of what has become one of the most desirable neighborhoods in Philadelphia for residents of every demographic. They will bring the public back into Hamilton Court, which was long known as one of the city’s most trafficked public venues, but has been a private building for decades.” 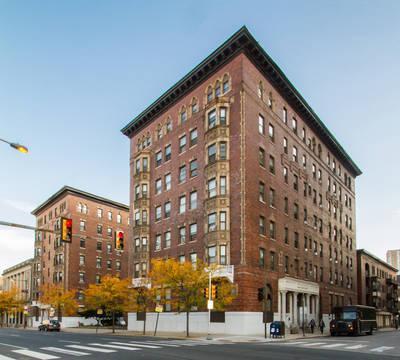 Hamilton Court, which is listed on the National Register of Historic Places, is one of a number of properties in University City owned by Post Brothers, which invested has invested $250 million in the neighborhood. Earlier this year, the company unveiled its renovation plans for the “U-shaped” building, which include restoring the property’s façade to its former glory. Formerly a hotel with a rooftop restaurant, Hamilton Court features a unique façade that was modeled after that of a Venetian palace.

“The facade of Hamilton Court is really special, and while we are not returning the property to its former hotel use, we are committed to preserving and restoring as much of its unique character as we can,” said Matthew Pestronk, president and co-founder of Post Brothers. “Additionally, we are installing all new facade lighting to ensure that the building’s incredibly beautiful details are highlighted during the evening hours.”

When first built and for many years thereafter, Hamilton Court’s courtyard was lushly landscaped with statuary and fountains. Post Brothers is in the process of restoring the outdoor space from its current state — a walled-off parking lot — to an outdoor space where residents can enjoy both active and passive recreation. The area will be fully landscaped and hardscaped, with bocce courts, fire pits, lounge areas, bike storage and lighting.

Additional renovations underway include the refreshing of resident lobbies, stairwells and elevators, as well as the construction of a new, 10,000-square-foot, architecturally significant amenities building that will feature a fitness center with state-of-the-art cardio and strength equipment, a yoga room, a multilevel, wrap-around, terrace with sun decks, and a terrace-level pool with an integrated fire pit and an oversized hot tub. Other new features of the modernized Hamilton Court include a study lounge/co-working space; super-high-bandwidth internet with the fastest upload and download speeds in University City; an on-site laundry facility with state-of-the-art washers and dryers; state-of-the-art electronic package storage lockers; secure fob access; and new on-site management offices.

“Luckily, many of the original details from when the property was a hotel have been preserved over the past 100-plus years,” Post Brothers Managing Director Randy Hope said. “The apartments have many historic features we that we restored, including inlaid original hardwood floors, fireplaces with carved wood details and stonework, exposed brick walls, and large original beams. Wherever possible, these features have been reconditioned so that they may continue to be enjoyed by those who live there.”

Post Brothers continues to be one of most active multifamily owner-developers in not only University City, but throughout the entire region. The company is currently in the midst of the large-scale redevelopment of Presidential City, one of the most historic and well-known residential communities in Philadelphia. Post Brothers is implementing gut renovations and exterior improvements to the complex’s four high-rise towers, which comprise approximately 1,000 apartment units centered around a brand new expansive pool club and leisure area.