Philadelphia, PA - Half of a block down the street from Independence National Historical Park is a building that is home to an updated hotel with two very interesting new concepts in Philly's culinary world.

Chez Ben & M Brown's are located on the ground level inside a posh hotel, formally known as The Franklin Hotel. It has since been renovated, and is now called the Renaissance Philadelphia Downtown Hotel and is affiliated with Marriot.

When you walk in you will see a large lounge area and two bars. A trendy one on the left hand side just in front of Chez Ben, and on the right side, a luxurious lounge area where M. Brown's welcoming mixologists are pouring their signature cocktails. 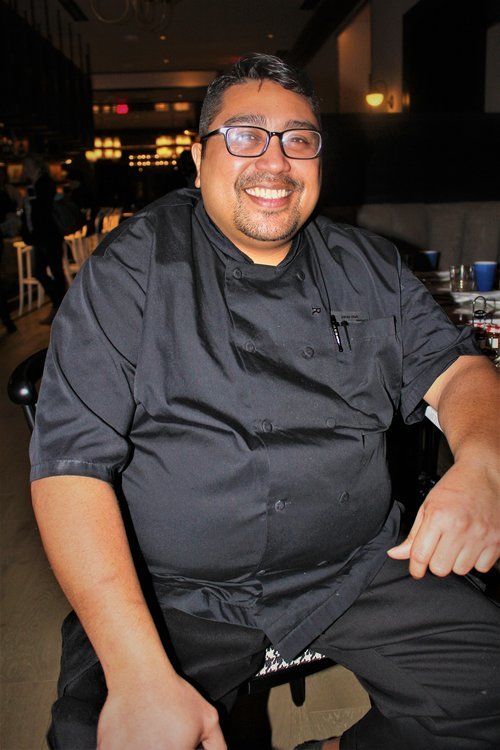 Chef Paras ShahYou can have a drink from the exquisite selection of liquors, offering anything from Blue Coat, a local Philadelphia distillery, to Suntory Whiskey Toki, a Japanese Whiskey. And with Beverage Manager Rachel Kovenetsky extensive knowledge of liquor and her willingness to make M. Brown's specialty drinks oh-so-appealing. You will not go wrong if deciding to try something new and sip on one of her personal twists to established cocktails, or a cocktail creation of her own.

“Blood and Sand and Martinez are my two favorite drinks we make here. We use American Dry Gin called Blue Coat, and they also make a Barrel finished Gin, and both of those Gins are the base of the Martinez. I recommend that to people who say they do not like Gin because it's really good, you can taste the Bourbon because the gin is finished in the American Oak Barrels. The Scotch we use is finished in Aerosol Barrels and then finished again in American Oak barrels so it's not peaty or smokey or anything that you would think of when you think of Scotch, it's super mellow and super woodsy,” Rachel Kovenetsky described to me.

As I sipped on the Martinez, which Rachel had recommended to my bourbon-loving self, I found her description of the “bourbon drinkers gin” was correct. I could taste the notes of the bourbon in the Martinez, and the Gin was not overwhelmingly powerful. It tasted mellow and a little sweet. And as I was finishing up with my Martinez, my table at Chez Ben's was ready.

Equally as exquisite as the specialty drinks at M. Browns, the adjacent restaurant Chez Ben's has food offerings from Chef Paras Shah. Chef Shah, who studied at the Institute of Culinary Education, has an extensive and impressive resume which includes 2 and 3 Michelin Star restaurants.

Seated on an elongated plush couch, my friend and I looked over the French-inspired menu that has an American twist. For anyone who is a lover of sea-food, there is a large selection to choose from. Anything from a RAW Bar to a larger selection of steamed mussels, and the buzz from the other foodies was that the Salmon was amazing. However Chez Ben's also has a nice selection of other food offerings, including dishes that Shah makes using D'Artagnan Rohan Duck comes exclusively from a farm in New York.

Considering that the restaurant is French-inspired, I chose to have pate; of course being a lover of food, I know how pâté is made, however my companion did not. I asked that the pâté we would try should be decided on by Chef Paras Shah. I was trying this very french appetizer for the first time, as was my friend, so I wanted the Chef to guide us in this culinary delight.

The Chicken Liver Pâté was presented with two pieces of charred bread, pickled onions, miniature pickles, and a sizable portion of grainy mustard; all were made by Chef Paras Shah's capable hands. I could taste the heaviness of the fat that the pâté naturally contained, and the earthy iron taste that comes from the using the liver. It was dense and the Scotch Gelee made it a little smokey, and having the pickled accompaniments made this starter dish more exciting to my palate. I will have to admit that pâté was not something my friend and I preferred, however it was good, just simply that I feel it's a dish for an acquired taste. 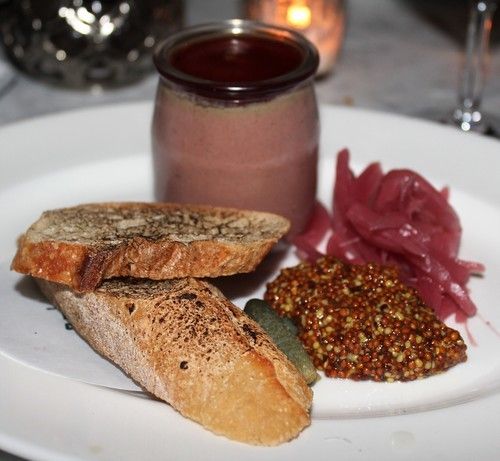 My friend had the Frisee Aux Lardon Salad for his main meal. According to him it was light and airy, and the dressing tasted like a light citrus vinaigrette; he stated that it was absolutely delicious. As for my main entree, I once again told my waiter that I wanted to have the Chef choose what I should eat. I trusted his opinion, and after all, this night was to showcase his talents. To my delight, a beautiful grilled Whole Black Sea Bass arrived at the table. It was seasoned with simple ingredients, lending the fresh fish to taste delicate and scrumptious on it's own. With only a light coating of olive oil and salt, the Bass's simplicity was filling and satisfying, and the accompanying side dish of fingerling potatoes were cooked perfectly; soft centers and lightly salted.

Feeling too full to attempt any kind of dessert, my friend and I left Chez Ben's. We both plan on returning to this restaurant, as it offers fresh and local cuisines that are absolutely delicious. And with Chef Paras Shah making everything from scratch, I believe that anyone who enjoys food will love to taste what Chez Ben and M. Brown's has to offer.