Philadelphia, PA - Puyero Venezuelan Flavor (524 S. 4th Street) celebrates its first anniversary with a weekend-long celebration from Friday, March 23 to Sunday, March 25, 2018. Festivities kick-off on Friday, March 23rd, from 11:30am to 1:00pm, with a celebration of Puyero's signature arepas - three varieties will be available for only $1 each. 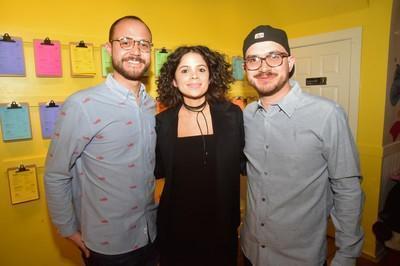 Later on Friday, between 6:00pm to 8:00pm, the public is invited to a free Friday Fiesta with free pasapalos (bite-sized food served at Venezulean house parties), plus lively decorations, party music and even a piñata. Puyero also feature a special anniversary menu through Sunday, March 25th with the debut of the Patacón Playero and the Arepa Cabimera. Full menu descriptions and party details are available by visiting Puyero Venezuelan Flavor on Facebook or by calling (267) 928-4584.

"We can’t believe it's been a year already," said co-owner Gil Arends. "We really want to thank everyone for welcoming us to Philadelphia's food scene - and for giving us the opportunity to share our Venezuelan roots and flavors with you. It's been an honor to have met so many wonderful people coming through our doors."

Puyero opened a year ago in March of 2017 in the heart of Queen Village and South Street Headhouse District. The fast casual eatery showcases Venezuelan street food - and centers around the arepa (the quintessential Venezuelan plate) and the patacon (a sandwich made from plantains).

Operating Puyero is a family affair, being owned and operated by Gil, Simon Arends (Gil's brother), and Manuela Villasmil (Gil's wife). Working with family is part of Venezuelan culture, and has been key to Puyero's first year of success. "We feel it is very special to have the opportunity to work with each other day," said Simon. "Family are the people that you trust the most and you know what to expect from them. They want to see you succeed just as much as they want to succeed themselves. We all feel we couldn't have done this without each other's support."

One year and thousands of arepas later, the three young restaurateurs will host a weekend filled with tons to eat and do from start to end. "One thing we all agreed upon immediately was that we wanted to celebrate BIG - just like we would back in Venezuela," added Gil. "We also saw this as an opportunity to introduce even more about our cuisine and culture to Philadelphia."

The festivities continue with a free, family-friendly Friday Fiesta from 6:00pm to 8:00pm. Enjoy complimentary pasapalos (bite-size food served in Venezuelan parties), including tequeños and mandocas. Plus, look for bite-size desserts like suspiros (meringue) and rainbow-layered jello. "If you grew up in Venezuela you know rainbow-layered jello is a birthday must," said Simon. "Our fiesta will also include lively decorations, party music and even a piñata. When you turn 1 in Venezuela, you get piñata at your party!"

"We wanted to highlight some of our signature dishes, but also mix things up by adding some different flavors and techniques to the party," said Manuela. "We want to celebrate all weekend long with you guys and be able to personally say GRACIAS. We hope you will join us!"