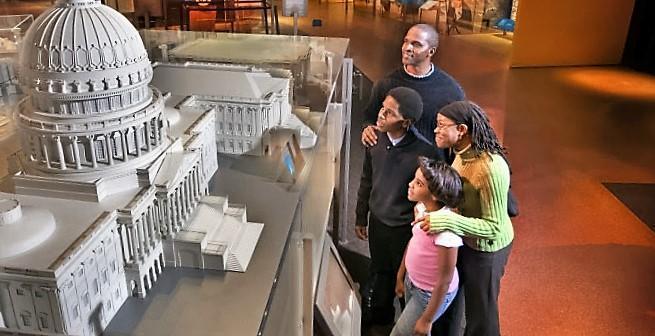 Across the United States, top-tier museums delve into the race to be POTUS via election-themed exhibitions. VISIT PHILADELPHIA® has gathered details on the largest such displays—in Philadelphia, Washington, DC, New York and Cleveland.

The following five exhibits delve into the decisions, rallies, marketing, music, handshakes and other fascinating details that are part of seeking the highest office in the land:

1.   PHILADELPHIA – Headed to the White House: More than 118,000 people have played the role of “candidate” at the National Constitution Center, located steps away from Independence Hall. People discover how elections have evolved over time, star in their own campaign ads, work with an interactive speech coach and take a seat behind the Oval Office desk. Along the way, they get the scoop on the electoral process, from the moment a candidate announces his/her campaign to the presidential swearing-in ceremony. Through December 31, 2016. 525 Arch Street, Philadelphia, (215) 409-6700, constitutioncenter.org/whitehouse; Press contact: Merissa Blum, (215) 409-6645, This email address is being protected from spambots. You need JavaScript enabled to view it.

2.   WASHINGTON, DC ­– Hooray for Politics!: Two rally signs remain at the entrance to an exhibit at the Smithsonian’s National Museum of American History that showcased every presidential hopeful since February 2016. Alongside sign-wielding mannequins, voting equipment reveals how Americans cast their decisions in the late 19th and 20th centuries. Visitors make their way to the museum’s political history collection to view memorabilia from long-ago and recent elections, including small metal buttons celebrating Washington’s inauguration in 1789 and posters from this year’s Democratic and Republican national conventions. Through November 14, 2016. Constitution Avenue, NW between 12th & 14th Streets, Washington, DC, (202) 633-1000, americanhistory.si.edu; Press contact: Public affairs, (202) 633-3129, This email address is being protected from spambots. You need JavaScript enabled to view it.

3.  WASHINGTON, DC ­– CNN Politics Campaign 2016: Like, Share, Elect: What’s it like to run for president in the social media age? CNN and the Newseum delve into today’s landscape, where candidates and the public can connect like never before—digitally. People can pose their own questions in the #CampaignConfessional and watch other voters from around the country do the same on screen. Instagram photos, media headlines and a display of happening-now issues and events round out the 2016 campaign experience. Undecided voters can use the Matchmaker to determine if their views align more with Hillary or Donald. Through January 22, 2017. 555 Pennsylvania Avenue, NW, Washington, DC, (202) 292-6100, newseum.org; Press contact: Jonathan Thompson, (202) 292-6353, This email address is being protected from spambots. You need JavaScript enabled to view it.

4.   NEW YORK – Campaigning for the Presidency: The New-York Historical Society Museum & Library presents more than 120 objects from the Museum of Democracy/Wright Family Collection, one of the world’s largest holdings of political campaign memorabilia. Board games, posters, T-shirts, paper dresses, stickers and other political effects showcase the ideals, culture, humor and biting criticisms of the elections between 1960 (Kennedy v. Nixon) and 1972 (Nixon v. McGovern). Johnson Juice, anyone? Through November 27, 2016. 170 Central Park West at Richard Gilder Way, New York, (212) 873-3400, nyhistory.org; Press contact: Ines Aslan, (212) 485-9263, This email address is being protected from spambots. You need JavaScript enabled to view it.

BONUS: Free Rides, All Uber Cities: Uber is getting in on the election spirit by offering free rides for first-time users on November 8. Sign-up information is available at voterdrive.us.