Executive Chef Terry White - Recently, modern steakhouse Urban Farmer and rooftop bar Assembly Rooftop Bar welcomed new Chef Terry  White. Best known to contemporary diners for his work over the past eight years at the Jersey shore, Chef White is a Philadelphia native and a steakhouse specialist who has opened branches of The Palm and Del Frisco’s across the U.S. He helped to reinvent and reinvigorate the staid dark-wood and white-tablecloth model to its modern farm-to-table ethos, and brings decades of experience with local purveyors to his new role. He looks forward to advancing Urban Farmer’s worthy mission of bringing the best of the mid-Atlantic to the table. 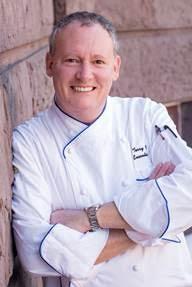 “I feel lucky to have experienced the current renaissance of the steakhouse, and no one does it better than Urban Farmer, where we wholly embrace the idea that a great steak comes from a great farm,” says Chef White, who cooked at Philadelphia’s storied Monte Carlo Living Room and Le Bec-Fin back when they were among the only important fine-dining restaurants in town. “When I started working in steakhouses, I was living out in Berks County, and I knew at once from my classical training that a meal of quality ingredients, such as farm-raised steak and fresh sides, should be something special and compelling.”

Chef White’s menus at Urban Farmer and Assembly will debut in stages over the coming weeks, and will highlight beef from nearby Berks and Lancaster Counties, along with local favorites such as Pennsylvania Lake Trout, farm-fresh produce and even scrapple. Guests can expect:

“For a long time, I traveled the country opening restaurants, and I learned first-hand how comforting and truly hospitable a good meal for one can be,” says Chef White, who once saved up two months’ salary as a young cook to dine at The Fountain at the Four Seasons, and is honored and excited to oversee the kitchen in the same famed space at Urban Farmer.