PHILADELPHIA - The American Thoracic Society will be hosting COPD Awareness Night during the Philadelphia Soul game on Monday, April 11. The Soul (1-0) will host the Jacksonville Sharks (0-1) at the Wells Fargo Center in Philadelphia, PA at 7 p.m. The game will be broadcast live on CBS Sports Network.

During the Soul game, public service announcements by ESPN commentator and Philadelphia Soul owner, Ron Jaworski and Soul QB Dan Raudabaugh will educate fans about chronic obstructive pulmonary disorder or COPD and encourage them to complete a short questionnaire. Players will wear orange (the COPD awareness color) socks, the Soulmates dance team will perform with orange pom-poms, and the team will be giving away orange rally towels to support the cause and bring awareness to the disease. Patient information on COPD will also be available on the concourse. 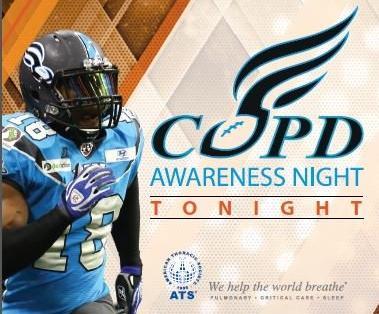 COPD is a serious, progressive disease, which includes chronic bronchitis, emphysema, or both, that robs people of their ability to breathe. While not reversible, COPD can be treated and its destructive impact on health slowed, especially when diagnosed early.

The ATS is a medical society devoted to fighting respiratory disease, critical illness, and sleep disorders through research, education, and advocacy. Patient education is an integral part of the Society's mission, and the Society welcomes this opportunity to promote COPD awareness and share the questionnaire with Philadelphia Soul fans.

"More than 11 million adults in the U.S. have been diagnosed with COPD, and at least that many have impaired lung function, suggesting that COPD may be widely underdiagnosed,' said ATS Executive Director Stephen C. Crane, PhD, MPH. "This devastating disease is the third leading cause of death in the U.S.While there is no cure for COPD, it can be treated. Public awareness and early detection are key elements of the battle against COPD."

Viewers can also go online and complete the questionnaire and then share their answers with their doctor. For more information on COPD or to complete the questionnaire, go to www.thoracic.org/go/phillysoul. Ticket vouchers are available for COPD patients at local ACME pharmacies, hospitals, doctor’s offices and respiratory pulmonary lung centers in the Philadelphia region.

This event is sponsored in part by Sunovion, a global biopharmaceutical company focused on the innovative application of science and medicine to help people with serious medical conditions.

About the Philadelphia Soul:
The 2015 Eastern Division Champion Philadelphia Soul are entering their 11th Season. In ten seasons of play, the Soul have won four Division Championships, three Conference Championships and a World Championship. Since the inaugural season in 2004, the Soul are the winningest professional sports team in Philadelphia. Season memberships and Group tickets for the Soul’s upcoming 2016 season are on sale now. For tickets, contact the Soul sales department at (215) 253-4900 ext. 3, or request contact from a Soul representative by filling out the form on www.philadelphiasoul.com. Follow the Soul on Facebook at facebook.com/soul and Twitter at twitter.com/soulfootball.