Philadelphia, PA - Officials provided the following update on the progress of the City’s operations in response to a four-alarm fire on the 200 block of Chestnut Street.

Work at the scene has proven to be unusually complex and high risk, due to factors including the interconnection and age of the buildings (built in the 1850’s), the severity of the fire damage, the unpredictability of how an unstable building will respond to disturbances, and the area’s narrow streets and high population density. Poor weather, including tropical storm-force winds, has caused further delays. 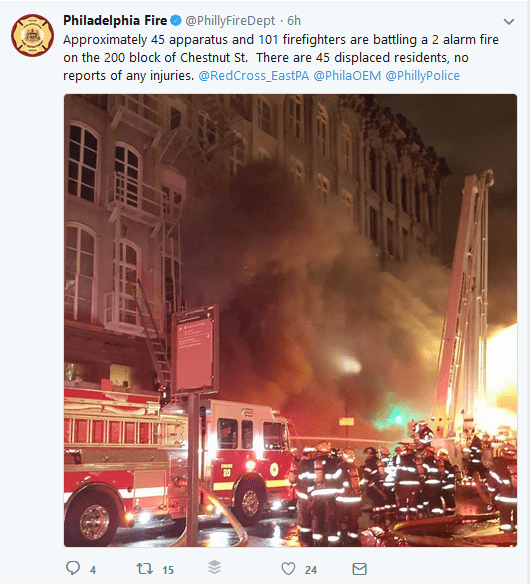 “Protecting the public from the threat of building collapse at the site of the fire remains the City’s overriding concern,” stated David Perri, Commissioner of the Department of Licenses and Inspections.

Numerous properties initially affected by the fire have been cleared for reoccupancy. City efforts are now centered on three buildings:

Two cranes will be needed for much of this effort. Barring further weather delays, it is expected that the cranes will be brought to the location in 7 to 9 days. While one will grip and remove items, the other will be outfitted to serve as stable footing for workers; due to the failure of roof and floor systems caused by the fire, there is no other place for them to stand.