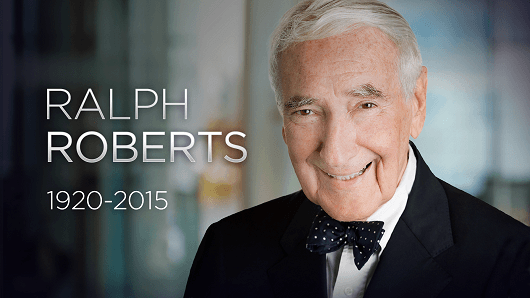 Philadelphia, PA - Comcast Spectacor Chairman Ed Snider on Ralph Roberts: "Ralph Roberts was a great partner and an even greater friend. He had a wonderful sense of humor and he was very inspirational to me personally. I will really miss him. We all will."

Roberts, who also served as the company's chairman emeritus, founded Comcast when he bought a small cable system in Tupelo, Mississippi, in 1963. From there, the company grew to the country's largest video, high-speed Internet, and phone provider to residential customers.

"I just think I'm an example of what you can do in America starting with very little, and if you have a good determination, and you're honest about what you do, you can be successful," Roberts said in an earlier interview.

"Ralph was a born entrepreneur, a visionary businessman, a philanthropist, and a wonderful human being. Ralph built Comcast into one of America's greatest companies and his vision and spirit have been at the heart of Comcast and our culture for 50 years," the company said in a statement. "He will be truly missed. Ralph's greatest love was his family, and our deepest sympathies go to his wife Suzanne and the entire Roberts family."

His son, Brian Roberts, now serves as the Philadelphia-based company's chairman and CEO. Ralph ceded the post in 2002 at age 82.

"Ralph Roberts has had a remarkable life, and a consistent one, too," Brian Roberts said in the foreword to the biography "An Incredible Dream" by William Novak. "In every setting—whether in the office, over dinner at his favorite greasy spoon, or painting a schoolhouse wall during Comcast Cares Day—he has always been optimistic, warm, and encouraging."

"Whenever I've seen him at the podium with his self-effacing smile, I've had the say thought: Sometimes the good guys really do finish first," Brian Roberts continued in the 2012 book.

Ralph was born in 1920 to a family of Russian Jewish immigrants. His father owned a small chain of drug stores in New York City, which Roberts later said inspired him to create a business.

"Instead of working for someone else, my father was driven to have his own business, to become somebody in this new country," he said in the biography.

Roberts was a graduate of the Wharton School of the University of Pennsylvania and served in the Navy, according to his company biography. Later in life, he became known for his signature bow ties and philanthropy in the Philadelphia area.

"Ralph was a remarkable man who touched the lives of so many people. He was a wonderful husband, father, and grandfather, and perhaps most importantly, a kind and humble human being. He will always be remembered for his generosity, integrity, honesty, kindness, and respect for everyone around him. He was an inspiration to us all and we will miss him greatly," his family said in a statement.

Ralph is survived by his wife of over 70 years, Suzanne Roberts, and four children. He is also survived by eight grandchildren, the family's statement said.

Many people affiliated with the cable industry praised Roberts' contributions on Friday. Charter Communications President and CEO Tom Rutledge called him a "true industry pioneer and Philadelphia gentleman" in a statement.