Resturation of William Penn Statue atop City Hall is Complete

Philadelphia, PA - Today the Office of Arts, Culture and the Creative Economy announced that the conservation of the William Penn statue by Alexander Milne Calder has been completed. 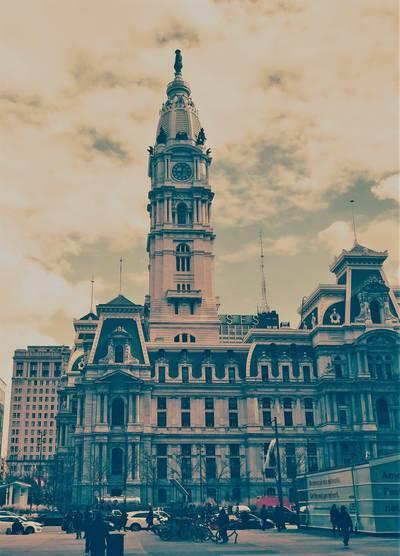 The treatment began on May 15th and was undertaken by Moorland Studios of Stockton, NJ. The conservation of Philadelphia’s largest statue – the largest atop any building in the world – required over 1,200 gallons of deionized water, fifteen gallons of a specially-formulated wax coating, and took an estimated 800 man-hours to perform the work. The 37 feet-tall bronze sculpture, located 500 feet above the sidewalk and weighing more than 53,000 pounds, was last treated in 2007. This year marks the 125th anniversary of the sculpture’s installation.

Conservation of the sculpture is undertaken every ten years to slow the deterioration of the bronze caused by atmospheric conditions – wind, rain and airborne pollutants. Cast in 1888 at the Tacony Iron Works in Northeast Philadelphia, the sculpture’s surface is extremely “pitted” due to the casting process and the statue’s first one hundred years exposed to the elements without the benefit of a protective coating. Corrosion accumulates in the statue’s pits, accelerating the deterioration of the bronze.

The conservation work included: inspecting and documenting the exterior and interior of the statue, including the use of drone photography to capture “before treatment” images of the statue from various vantage points; cleaning the statue with a low-pressure de-ionized water system and non-ionic detergent; and a laser treatment to remove areas of significant corrosion that a water treatment cannot resolve.

Accessing the sculpture required installing scaffolding from the floor of the City Hall Tower Observation Deck to the top of William Penn’s hat. During the initial inspection, the bronze was seen to have a significant amount of corrosion throughout, with accumulation on Penn’s coat and the top of his outstretched hand. Following the intensive cleaning process, a specially-formulated protective wax coating was applied, after which the entire sculpture was thoroughly re-inspected and buffed to ensure the evenness of the coating. Conservators also re-caulked areas of potential water intrusion, such as the area around the hatch in the top of Penn’s hat which provides access into the statue. Finally, a structural engineer inspected all of the bolts that anchor the statue to the tower to ensure the security and safety of the sculpture. Conservation work on this bronze sculpture of the early Quaker and founder of Pennsylvania was previously undertaken in 1987, 1997, and 2007 and was overseen by the staff of the City of Philadelphia’s Public Art Program.

Constance Bassett and David Cann of Moorland Studios, the conservators who have performed each of the statue’s four conservation treatments, noted that each campaign has provided an opportunity to improve upon and modify the process of arresting the bronze deterioration that develops during the ten-year intervals between treatments. “Significant advancements have occurred in the field of laser technology in the past ten years, allowing for its use on this project and resulting in greatly-improved corrosion removal and the preservation of the statue’s patina” said Bassett and Cann. Because the rate of corrosion increases over time, the continued care of this masterful sculpture is critical to ensure that it is preserved for the future.

“We are gratified to have completed the monumental task of conserving Philadelphia’s largest and perhaps most historically-significant work of public art,” said Margot Berg, Public Art Director for the Office of Arts, Culture and the Creative Economy. “The statue endures as a testament to the astonishing craftsmanship and extraordinary achievement of the artist Alexander Milne Calder.”

Funding for the conservation was provided by a grant from the National Endowment for the Arts, City capital funds, and private donations. The scaffolding will remain in place through late July while the City replaces the caulk in the tower dome to prevent water infiltration. Following the removal of the scaffolding, Moorland will utilize drone photography to capture “after conservation” images of the sculpture for comparison to the “before” drone photography.