- Located behind a shopping center in Royersford, PA, you might think you’re driving onto the set of a horror film, but it’s just the opposite! It’s a beer wonderland complete with friendly staffed, expertly crafted brews, and an enormous projector screenon the wall. Only one dimly lit, small sign above a door lets you know it’s there. It’s a little hard to find in the dark, but the extra effort is well worth it!

“Hazy,” juicy IPA’s are all the rage nowadays. To achieve this opaque color, high-protein grain, such as oats, must be used in the brewing process, and it needs to be boiled in a very particular way. This is something Stickman does masterfully every time. Every beer they’ve put out recently has been hazy, such as Plain Chicken Nuggets, a juicy pale ale, Ladies who Lunch, a mimosa IPA, and the return of their highly anticipated Double India Pale Ale, Sensible Portions. 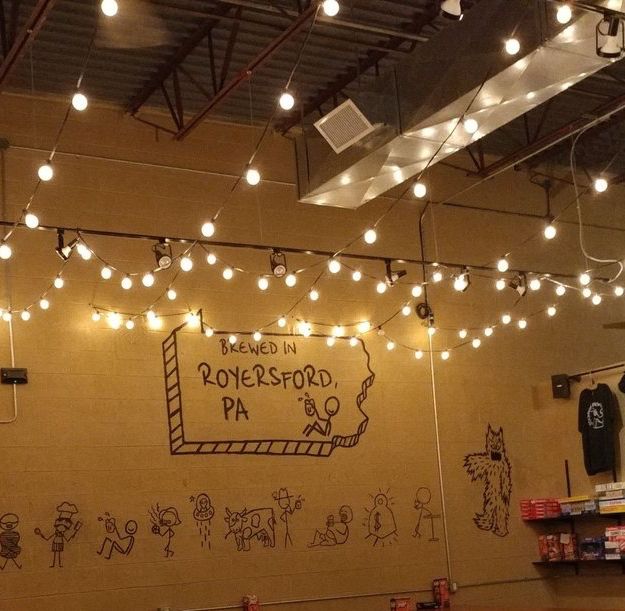 If you don’t like IPA’s, have no fear! They have also been brewing up some pretty fantastic stouts such as Stack That Cake, an imperial stout brewed with chocolate and vanilla, but it doesn’t stop there! They’re also currently pouring a Pilsner (Young People Fun Party), Hibiscus Saison (Emma’s Blossom), an Imperial Blonde (Too Much Diggity), and a Belgian Single Ale (Trappe Muzik). They even serve locally produced wines. Stickman satisfies everyone’s palette! Bring your dad! Bring your boss! Bring your wife! Everyone’s sure to find something to their liking at Stickman Brews!

The haziness of a beer tends to coincide with the rating it receives on “beer nerd” apps, such as BeerAdvocate and Untappd. Most of them remain around 4 out of 5 stars, which is where Stickman’s beers stand. They are just that good! Stickman brings the best of craft beer to your taste buds without making the customer feel inferior for not being knowledgeable about craft beer. They even crack jokes about beer nerd culture with the names of some of their beers, such as Store Bought is Fine, Rate This Poorly on the Internet, and Fat Guy in Suspenders. Stickman serves great craft beer without the pretentious atmosphere of a craft brewery.

Their fridge is always stocked with cans and bottles, and they’re always pouring delicious brews at 326 N Lewis Rd Suite #240, Royersford, PA 19468, so go grab a cold one! …or two.