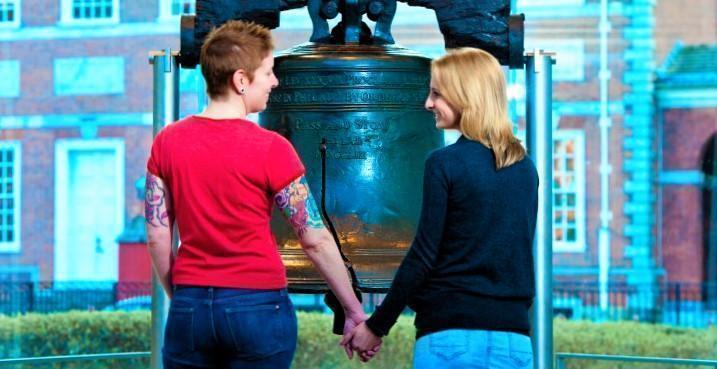 A symbol of freedom and equality for all, the Liberty Bell remains one of Philadelphia’s most-visited attractions. In view of Independence Hall and The President’s House, where nine enslaved Africans served the first president, it’s a reminder of the fragility of liberty and the determination of Americans. (Photo: VisitPhilly)

PHILADELPHIA, September 20, 2016 – It’s no secret that Philadelphia is one of the LGBT-friendliest cities in the country, but Philly pride extends past the rainbow flag-adorned Gayborhood.

Here’s a look at some of the places and organizations where LGBT life thrives outside the Gayborhood:

South Philly’s restaurant- and bar-chocked corridor has developed such an LGBT presence, it’s earned the moniker the “Gayborhood South.” What this scene lacks in rainbow-clad street signs and buzzing nightclubs, it makes up for in low-key happy hours and charming gay-owned businesses.

These two north of Old City neighborhoods have emerged as the spot for well-to-do transplants (Northern Liberties) and young creatives (Fishtown). Both offer a welcoming atmosphere to all.

Art lovers fill Old City's historic streets every first Friday of the month, when galleries open their doors for an after-hours peek at their latest exhibits. The occasion brings a festival-like air to the neighborhood, with street performers and vendors and festive sauntering among the bars.

Next to shopping and dining out, the most loved pasttime in this well-kept corridor is people-watching, both at gleaming bistros like Parc and Rouge, along busy Walnut and Chestnut Streets and in lush Rittenhouse Square itself.

There's a lot of history on South Street, though visitors would never know it with all the young faces crowding in on weekends to check out its artsy bar scene. The best-known action takes place east of Broad Street—with one very notable nightlife exception.

With Sprawling Clark Park and tree-lined streets, this university and residence-filled neighborhood can feel miles away from Center City. Lining colorful Baltimore Avenue are LGBT-friendly businesses, counterculture cafes and ethnic eateries that transform into nightclubs when the sun sets.