Philadelphia, PA – It’s back! SkyGarten, perched 51 stories above Philadelphia, made its mark last year as the world’s most celestial beer garden at Sky Philadelphia, formerly Top of the Tower. Tomorrow, April 19, marks a fresh new season as one of Philadelphia’s most popular summertime evening destinations returns after a brief hiatus, and preceded by the über-popular winter pop up — SkyLodge — holding court for the winter months. 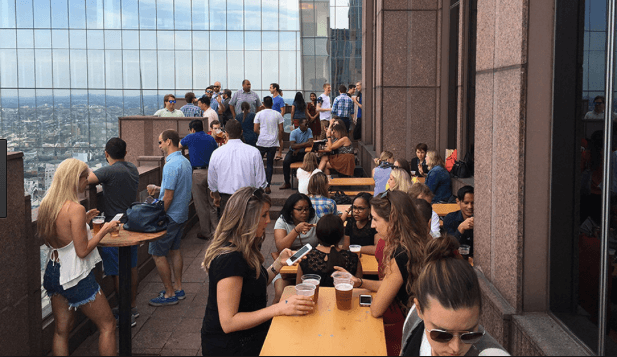 On opening day, a $5 cover gets guests a first beer or glass of wine on the house. While the modest cover will be in place throughout the season, guests will enjoy an enhanced experience with DJs spinning and other fun high above the clouds, as well as access to the balcony and sky-high beer garden.

Lead Bartender and Beverage Manager Jesse Cornell is back with a carefully curated list of German brews on tap, including Schofferhofer, König Ludwig Hefeweizen, Captain Lawrence Effortless IPA and Warsteiner Pils. Later this season, SkyGarten will offer a selection of frozen drinks ranging from old school frozen margaritas to craft cocktails made slushy. Not in the mood for frozen? Cornell’s SkyGarten cocktail list includes a classic Old Fashioned, Skyy Citrus Mule, and his own — the Soda Jerk — mixed with QC Malt as a highball, Lemon Shrub with vodka and Old Dutch with McGillicuddy’s Vanilla.

“We wanted to take it one step further and have even more fun this summer,” Cornell said. “That’s why I’m pumped about my incoming slushy machine and our DJ nights! We’ll be the highest place in the city to get down on hot summer nights.”

This Monday, August 21st, the U.S. will bear witness to the first total solar eclipse to travel across the country, coast to coast, in almost 100 years! The best place to watch it? 51 stories up — at SkyGarten! Philadelphia’s tallest beer garden will open its doors on Monday from 12-4pm, for a Solar Eclipse Watch Party!

Hungry summertime revelers will be satiated with Chef Mark Brinton’s German–inspired light fare. Some of Brinton’s new 2017 summer menu items include Bourbon Buffalo wings, served with celery, carrots and blue cheese; and hearty Mac & Cheese Balls made with pepper jack, queso chihuahua, Parmesan cheese and salsa verde. Larger plates include the Wurst Platters with either Bratwurst (Pork, caraway, mace and ginger) or Bauernwurst (smoked Pork and Beef, garlic black pepper and mustard seeds). Both come with a side of Sauerkraut and crispy French Fries. Chef’s BBQ Pork Sandwich with tangy BBQ sauce and Cabot sharp cheddar Cheese is also a good option for those looking to quell hunger. Returning favorites include the classic Bratwurst Sandwich and the Sky Burger.

For convenience after placing their order, guests will be given a pager that buzzes once their food is ready, making it an easier and more enjoyable experience all around.

SkyGarten at Sky Philadelphia (formerly Top of the Tower) is located at 1717 Arch Street, in the heart of Philadelphia’s business district and steps from Barnes Foundation and other attractions. www.skygartenphilly.com