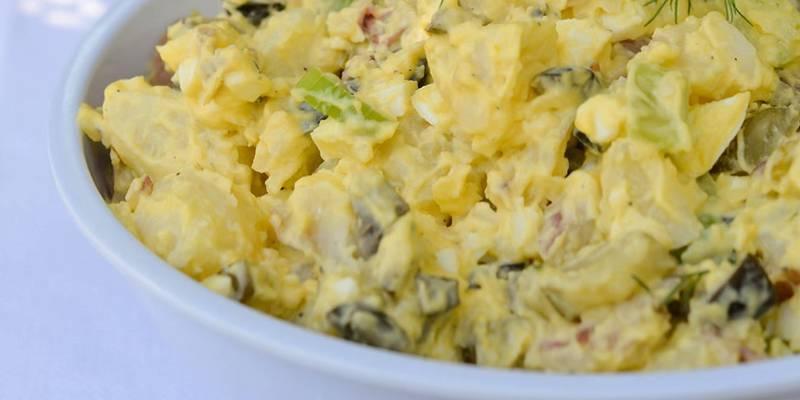 Potato salad is a dish, usually an appetizer, made, obviously, from potatoes. However so, it still varies throughout different countries and regions of the world. Potato salads are more classified as side dishes than salads for they generally just precede or the follow the main course.

Potato salads are often served along with Hot Dogs, barbecue, Hamburger, roasts and cold sandwiches. This kind of salad is categorized more as a casual fare and more often served during outdoor barbecues, picnics, and other sorts of casual events or meals. But this fact is not stated to underestimate their savory goodness.

Potato salads are definitely a popular menu choice of various chefs and cooks for preparing food for a large crowd, and since they can be made in large quantities with utter ease, they can also be made in advance and kept in the refrigerator until it is their time to be served.

You must never worry about emptying your wallet when going to the grocery store to buy whatever ingredients you need for you potato salad. The ingredients needed for potato salads are inexpensive and very much affordable. Thus, you do not have to worry about making one yourself because it is, in fact, quite easy.

You would need two pounds, or approximately six large potatoes which are peeled and quartered; two stalks of chopped celery; one finely chopped onion, of which you could cook using a microwave on high level for just one minute to be able to reduce that hotness, if you want, that is; four green onions that you have sliced for just ¼ of an inch thick; one large carrot, shredded; ¼ cup of a sweet pickle relish; ¼ cup of chopped red onion; one teaspoon of dry parsley; a half teaspoon of mustard seeds; you would also need pepper or salt for the taste, along with balsamic or wine vinegar, and also with yogurt or a nonfat mayonnaise.

Of course you have to cook the potatoes in boiling water for approximately fifteen minutes, or when the potatoes are already barely tender. You have to check every minute or so after the first ten minutes have gone by. Once you have confirmed of the cooked status of your potatoes, cut them into smaller pieces. After that, just leave them be so that they will cool down. Then, you should mix the other ingredients you have also prepared in a large bowl. Once you are confident that you mixed them finely, add your already cooled potatoes, and then mix them, altogether, well. When all these are done, chill your self-made potato salad, but just do not forget to stir it a couple of times during the chilling time you have allotted for it.