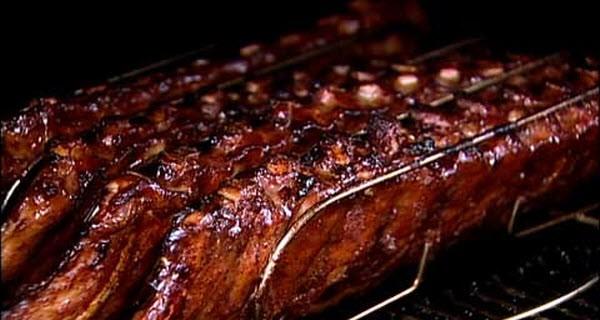 Kansas City ribs are serious business when it comes to BBQ. True to tradition, barbeque in Kansas City Style Dry Rub, smoked with hickory and coated with a KC style sauce. For Kansas City Style Sauce means a thick, rich and tangy tomato based sauce with molasses and sometimes a hint of vinegar. The meat is seared, slow cooked and mop basted with sauce until the meat is tender and a nice crust has formed on the outside. Roll up your sleeves and get ready for sauce that you enjoy getting under your fingernails.

Kansas City’s first recorded barbequer was Henry Perry back in 1908. Perry become very well known for his succulent ribs and would serve them to customer who would come from miles away. Perry converted an old trolley barn into a restaurant and would serve is ribs on newspaper for 25 cents a slab. “Old Man Perry’s” restaurant was located at 19th & Highland and was later sold to George Gates and Charlie Bryant. It become known as Arthur Bryant’s and is still today regarded as one of America’s greatest rib joints. Today Kansas City boast over 90 rib restaurants.

As with any rib, first start by removing the membrane on the back of the rib. This can prove to be difficult with wet finger. Dry hands and a paper towel work well for this. The paper towel will allow you to get a better grip on the membrane. Evenly coat the ribs with the dry rub, wrap with plastic wrap and then foil. Refrigerate for at least 3-4 hours but overnight is best. 30 minutes before you are ready to cook the ribs, remove them from the refrigerator and allow to come to room temperature. Continually mop the ribs with sauce until finished cooking.