Jenkintown, Pa - As an avid meat lover, I have to admit that I was a bit timid to try a cuisine which consisted of only vegetables. Nevertheless, it turned out to be a delightful experience with some of the most tantalizing dishes I have ever eaten.

Flora is a relatively new restaurant, only open about a year and a half now, located in the heart of downtown Jenkintown. My initial impression upon arrival was how appealing and intimate the 16 seat establishment was, making it an ideal spot for a romantic meal. The décor revealed a country rustic meets classical charm theme inside. The tables are made of an unfinished wood and the drinking glasses, which happen to be my absolute favorite, are mason jars! As I looked around, I noticed little touches that made the space unique. The ceiling appeared to be original to the building and resembled 18th century plasterwork, while the lighting was a bronze fixture with wired bulbs strung out across the ceiling. One of the co-owners Dan, who also happened to be our waiter, was very hospitable, attentive, and informative regarding any questions I had for him. The current menu features dishes with ingredients that are relevant to the spring/summer season.

To start off, we were offered complimentary bread with vegan lemon herb butter. I know its only bread and butter, but I cannot praise this enough. The butter was excellently seasoned with a light lemon zest and earthy herbs, which pared perfectly with the warm crusty bread. I could have eaten an entire loaf of bread with the butter, but I needed to save room for the remaining scrumptious dishes to come. 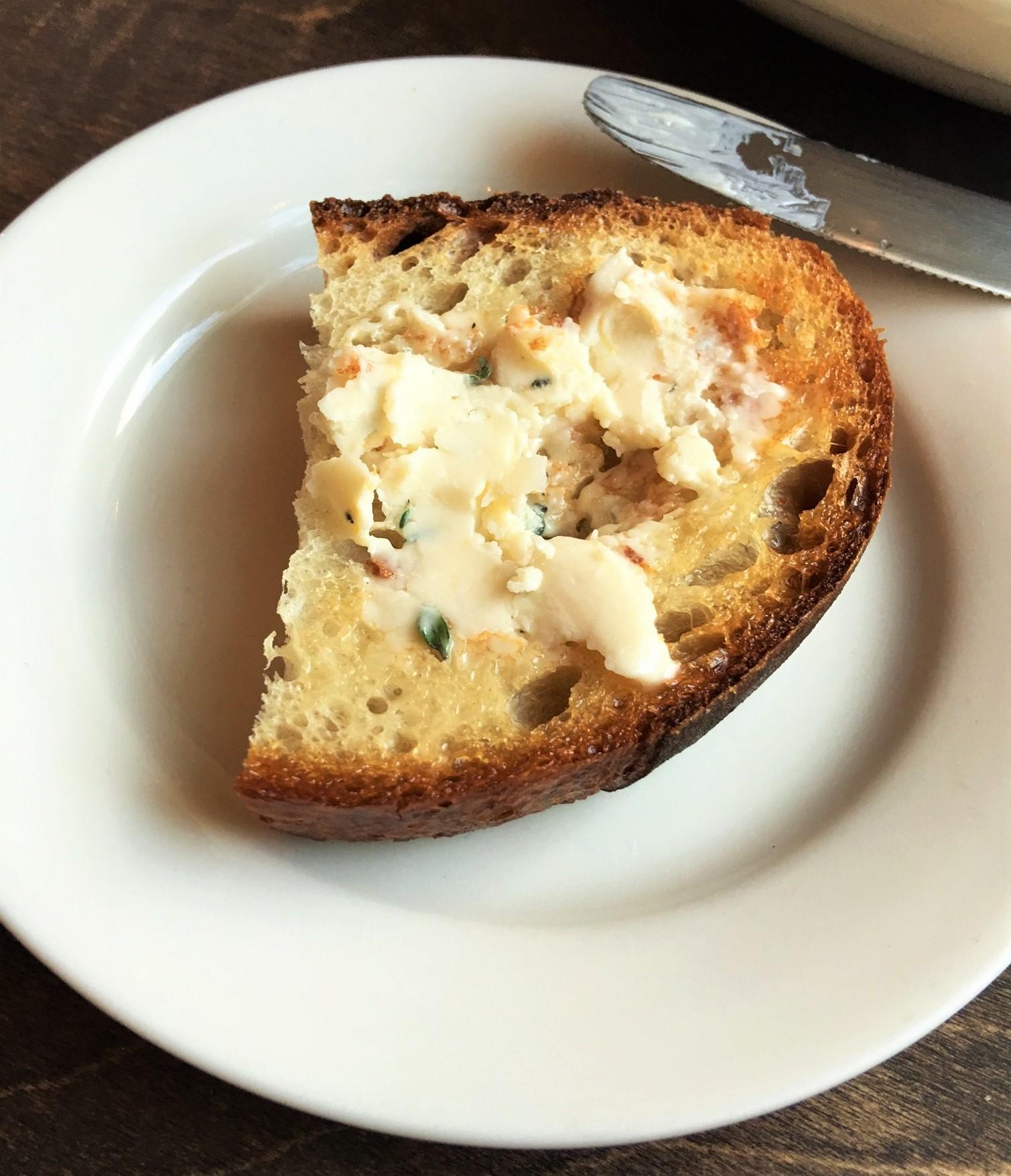 My first course, after much consideration, was the tomato and eggplant tart topped with fresh spinach, arugula, grilled corn off the cob, red onion, and mint. Let me start off by saying that I have never liked eggplant due to its sliminess and biter taste, however I went for it anyway and I could not have been more satisfied with my decision. The tart was presented beautifully with multiple vibrant garden colors. When I cut into the tart, the pastry was so light and flaky that pieces of it landed all over the dish, the table, and my lap; I’d say that’s a great indicator it was cooked just right. The eggplant had a smoky spice which was balanced very nicely with seasoned veggies and a crunch from the raw greens. My husband ordered the cool cucumber soup poured over cooked peas and an avocado wasabi cream sauce. I did not hesitate to try the soup and found it to be phenomenal! The coolness of the cucumber could not have been fresher; it was almost as if I was drinking the juice from the bottom of a bowl that held cucumber salad. The creaminess of the avocado/wasabi sauce gave it an extra kick of flavor. 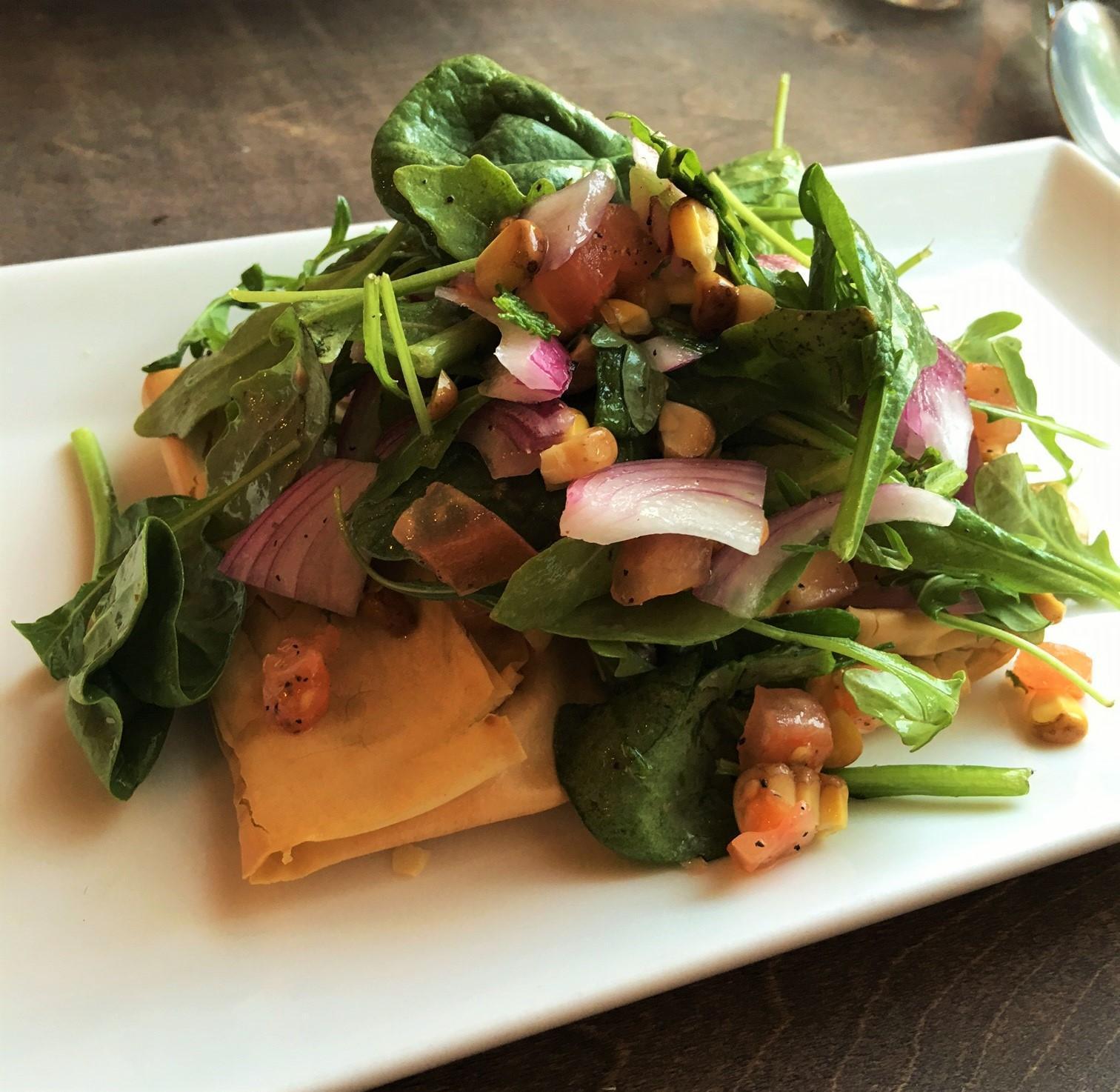 Next, and by far my absolute favorite dish of the night was the battered green beans! Oh my goodness, these were incredible. The green beans were covered in what tasted like funnel cake batter and fried to extra crispy perfection. They were drizzled with a Worcestershire aioli that added a sweet tang to the crunchy beans. 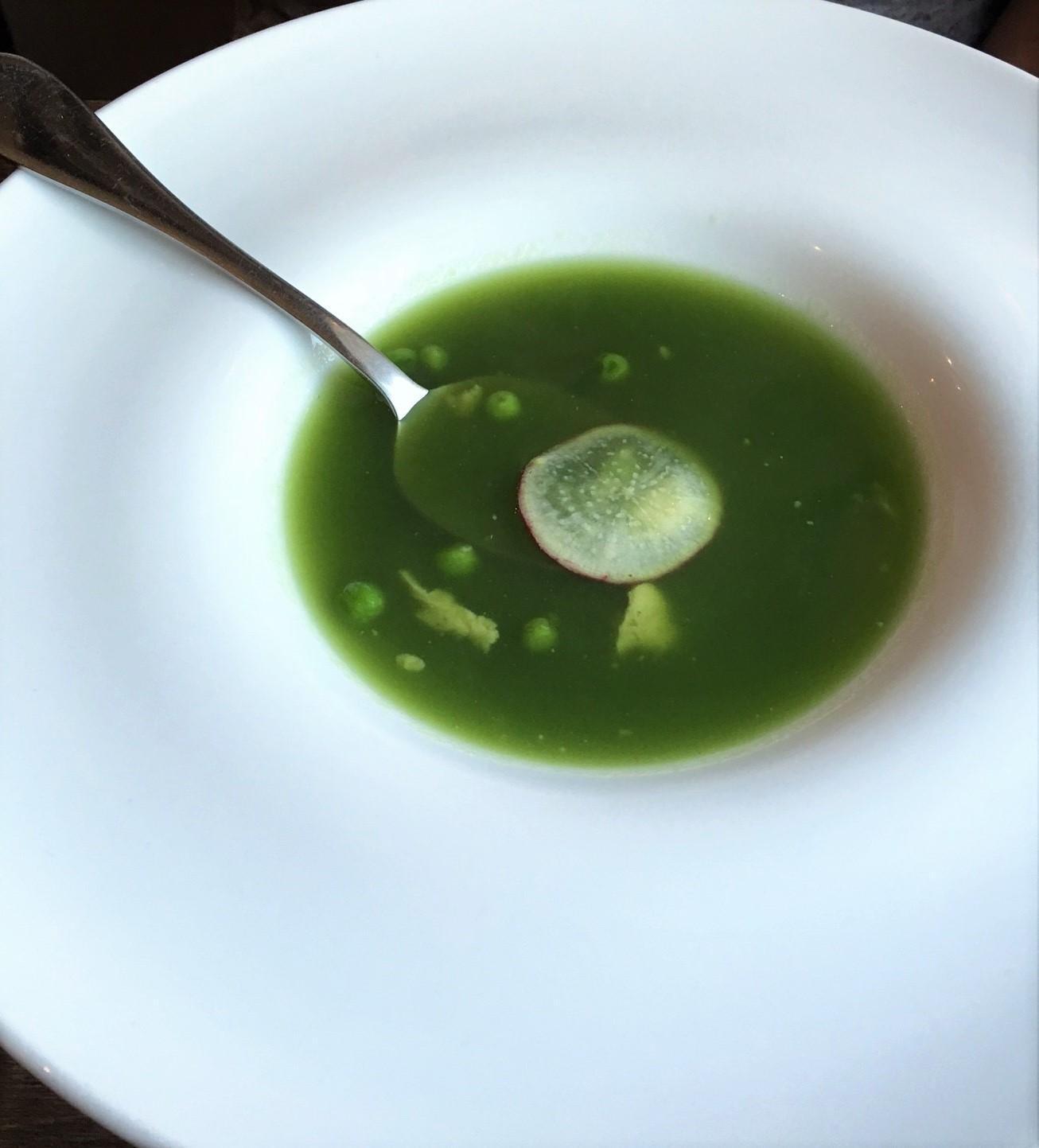 For my third course, I chose the potato scallops atop black rice and burnt onion in a mushroom horseradish sauce. As I do admire traditional seared sea scallops, the potato scallops did not disappoint. The edges were nicely toasted giving them a golden brown color and crisp texture. The black rice cooked al dente mixed with mushroom horseradish sauce was hearty and savory, adding a hinted peppery taste to the smooth potatoes. 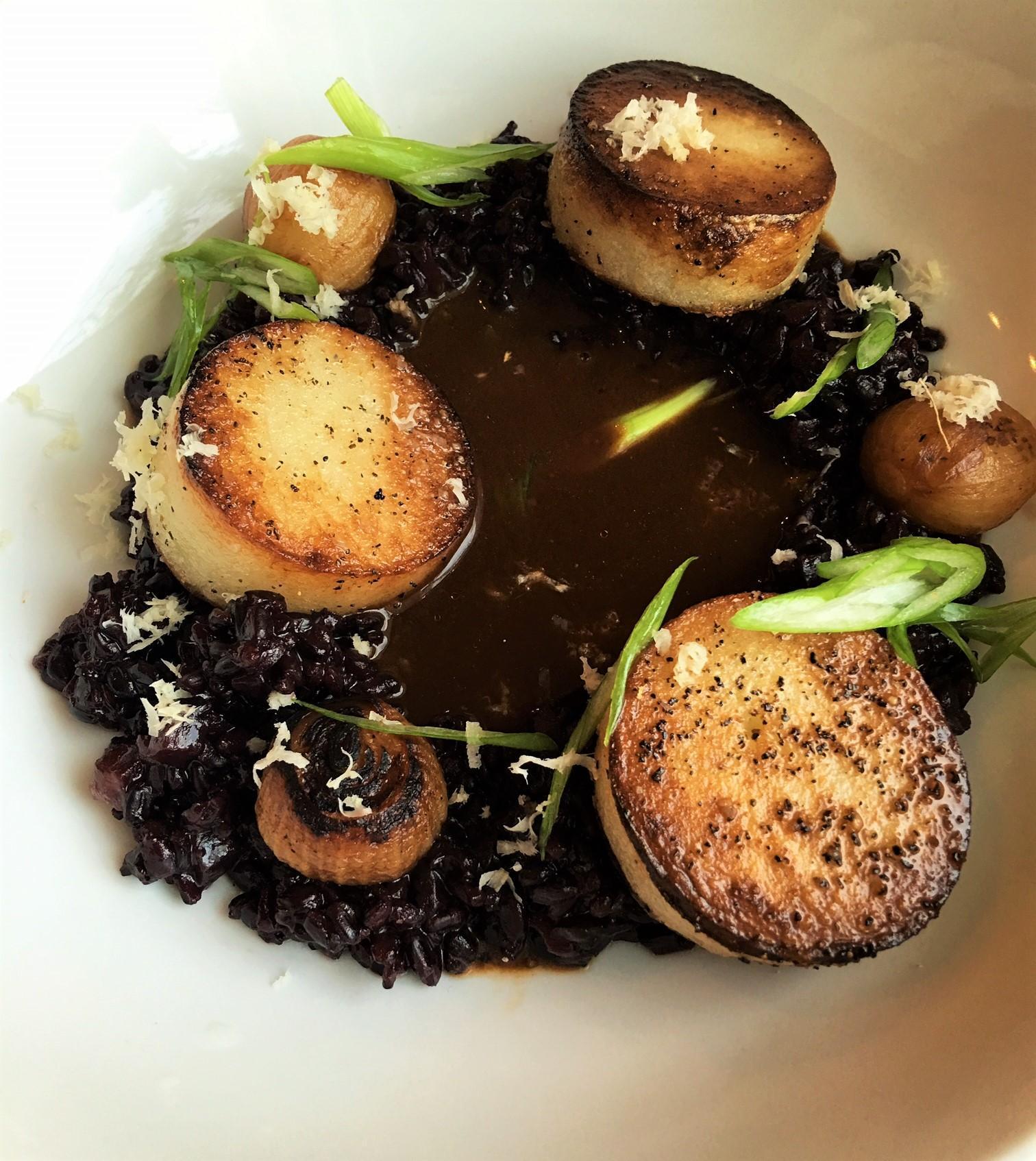 And last but not least, dessert consisted of three deep fried zeppoles covered in powdered sugar with a side of coffee drizzle sauce. The zeppoles were delectably sweet with a slight presence of lemon and the warm coffee sauce added a delicate flavor. 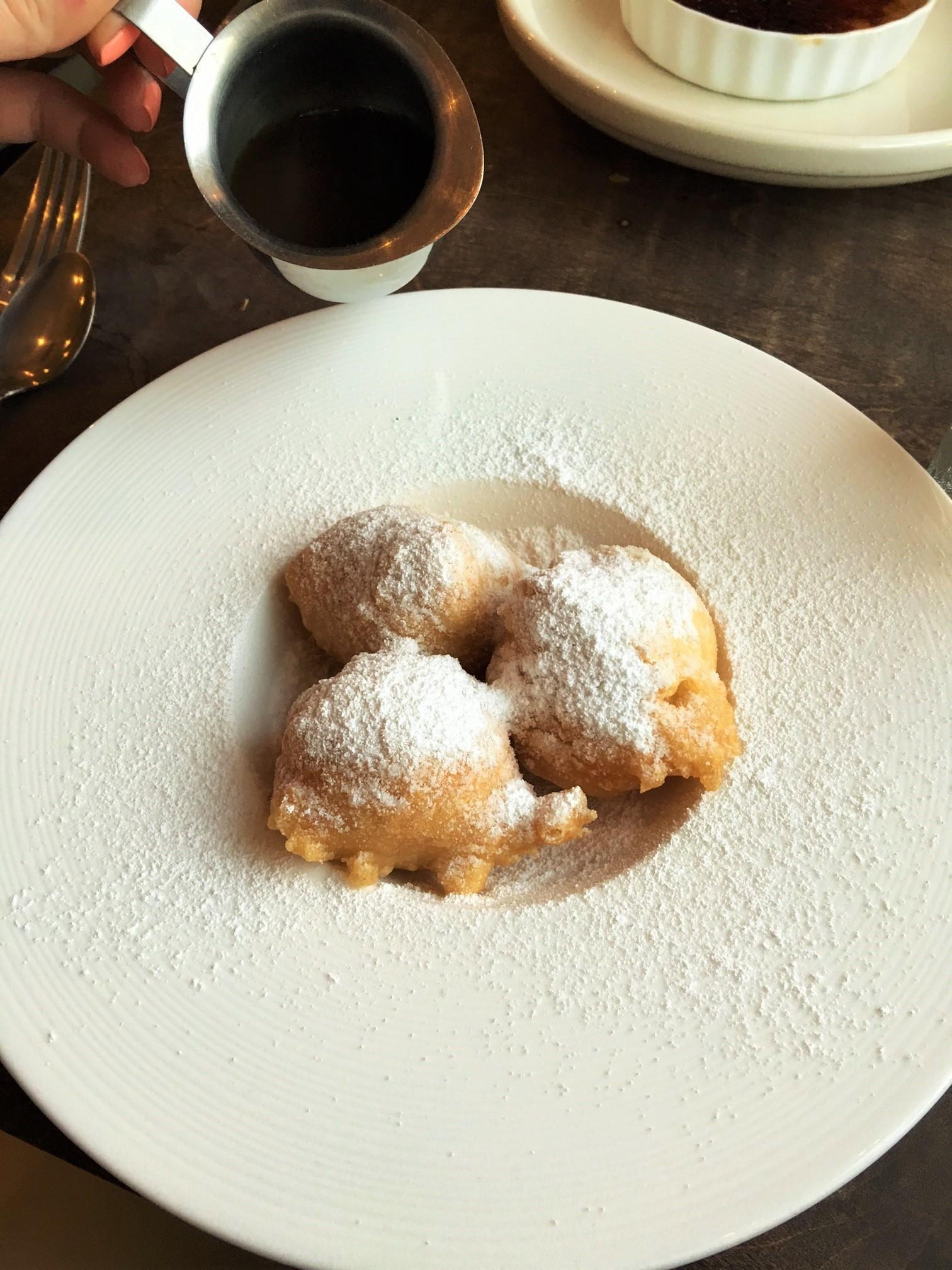 After indulging in a four course meal that was both exquisite and delicious, I was also pleased to learn that a majority of the produce used in the dishes at Flora are locally grown. With the options of a three or four course meal reasonably priced at $35-$40 and extremely generous portions, you will not leave disappointed or hungry. All of the dishes are innovative and executed in a way that the habitual carnivore won’t even miss the meat at all.