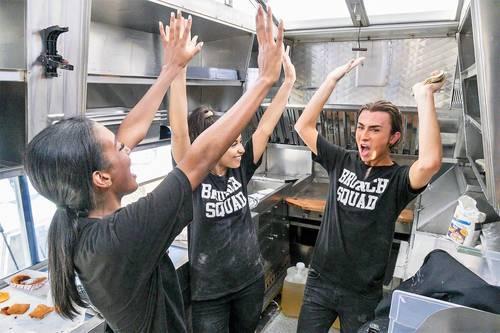 Each teams cooking chops, selling strategy and business savvy are tested in every city, with the least successful truck heading home each week and a $50,000 grand prize for the last truck standing. The Great Food Truck Race premieres Sunday, August 20th at 9pm ET/PT and the winner will be named in the season finale on Sunday, September 24th at 9pm ET/PT.

"Each summer our audience looks forward to taking a fast-paced, food-centric road trip with The Great Food Truck Race," said Courtney White, Senior Vice President, Programming, Scripps Networks Interactive. "This season adds some Southern hospitality to the competition, and the teams hit the pavement running with fantastic food, unique concepts and the hunger to win."

In the first episode, the teams are greeted in the French Quarter of New Orleans by host Tyler Florence and their dream food trucks. The race kicks off immediately with the first challenge called "Dough for Dough," where they must create their own version of a beignet and sell it in the French Market. The teams find out running a food truck is harder than they thought, and the second New Orleans challenge is to create a dish using the flavors of the popular Hurricane drink. Local chef Susan Spicer determines who created the best plate, then one team is eliminated and the rest move closer to the finish line and $50,000 grand prize. The route then hits Pensacola, Florida; Tuscaloosa, Alabama; Nashville, Tennessee and Athens, Georgia, leading to the finale location in Savannah, Georgia, where one team will be awarded the $50,000 grand prize.