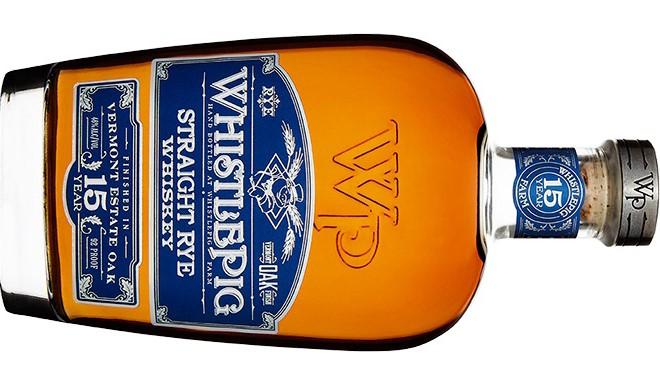 SHOREHAM, VT – (May 3, 2016) – WhistlePig announced today the launch of its 15 Year rye whiskey, marking the next step in the company’s vision of becoming entirely farm- to-bottle. Aged for 15 years and finished in Vermont White Oak from the WhistlePig Farm and surrounding area, this whiskey combines rye spice with wood sugar, earth, and allspice, delivering a flavor and texture only accessible after long, long years in a barrel.

Kentucky oak trees are fat, Vermont ones are tight. Tight wood rings deliver more flavor and depth into whiskey. To fully accentuate the unique flavor profile of the oak, WhistlePig developed a Custom-Charring Initiative for the 15 Year. The barrels receive a long toast and heavy char designed to draw out a rich sweetness that complements the natural spice of aged rye, and ultimately provides a most exquisite mouthfeel.

“Since day one, our vision was to create a fully farm-to-bottle operation, and with the release of the 15 Year, the public can now enjoy a top-notch whiskey aged in barrels made from wood right here on our farm,” said Raj Peter Bhakta, Founder and CEO of WhistlePig. “Tight is better than fat, and old is better than young. In whiskey at least.”

With the opening of its distillery on the WhistlePig Farm in Shoreham, Vermont in the fall of 2015, WhistlePig became one of the few whiskey companies to house every aspect of the whiskey production process in one place, from harvesting the rye fields to distillation, barreling, aging, and bottling the liquid. The 15 Year is the first WhistlePig release aged in barrels constructed from oak grown on the farm, and rounds out WhistlePig’s portfolio as the most premium offering, accompanied by the 10 Year and 12 Year Old World Series. WhistlePig also plans to release additional innovative products matured in Vermont White Oak moving forward.

The 15 Year comes from a mash of 100% rye and is hand bottled at 92 proof. The whiskey is aged in three separate whiskey barrels: #3 Charred New American Oak, used bourbon barrels, and finished for six months in custom #4 charred Vermont White Oak.

The 15 Year is a highly limited release and is available in select markets.

Flavor Profile of the 15 Year

Nose: Deep and rich, dominated by caramel, vanilla, and oak with hints of allspice and burnt orange.

Taste: Warm, rich, and slightly creamy; loads of butterscotch and baking spice with leather and a hint of tobacco

WhistlePig is the premier aged rye whiskey, featuring the bold and often untapped flavor of rye. Founded by Raj Peter Bhakta with the help of legendary master distiller Dave Pickerell, WhistlePig is leading a surge of innovation in the emerging field of North American whiskey. As the most decorated rye whiskey – having received a record 96 points from Wine Enthusiast – WhistlePig is widely viewed as the world’s finest rye. With the opening of its distillery on its 1,300-acre Vermont farm in the fall of 2015, WhistlePig has become one of the leading farm-to-bottle rye whiskeys in the world.