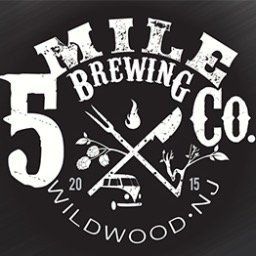 Created from the drive and ambition of Brendan Sciarra, the 5 Mile Brewing Company is on a mission to create the finest quality craft beers while providing the most detailed attention to food and bar service that meets and exceeds his already well established reputation.

ROOTS
The year is 1969. Richard Nixon is being sworn in as President of the United States, Neil Armstrong is walking on the moon. Four days of peace, love, and music are happening in Woodstock, New York. Mike Sciarra, a young, wet behind the ears surfer is fresh off the plane from the island of Oahu. With a bachelors of economics under one arm and a surfboard under the other, Mike set his sights on the east coast with a mission to create a brand with a positive vibe that offers premium products at affordable prices for patrons both young and old; and Kona Surf Co. was born.

A NEW GENERATION
It is through this ambition and success that inspired the entrepreneurial spirit of his son, Brendan Sciarra, who’s vison has launched several keystone business’s on the island of Wildwood, NJ. In 1998, Brendan took over a then failing restaurant/bar and with his detailed approach and hands on philosophy, seemingly handcrafted the Dogtooth Bar & Grill into the island’s most noteable establishment and local favorite. Even with a relentless approach to expanding his brand, the Dogtooth maintains firm to it’s roots, evident by the surf board from his father’s original surf shop hanging in the restaurant.

KEEPING A FINGER ON THE PULSE!
Once again, with a recognition and desire to enhance the city of Wildwood and it’s economic state, Brendan’s vision proved spot on when he purchased the building across from the Dogtooth, in what is now established as Poppi’s Brick Oven. After months of reconstruction, a beautiful facelift, and extensive training on the exact science of Napolitan style pizza making by world renowned Giulio Adriani, Poppi’s has become one of the fastest growing restaurants on the island. Again, remaining faithful to his roots, Poppi’s interior.