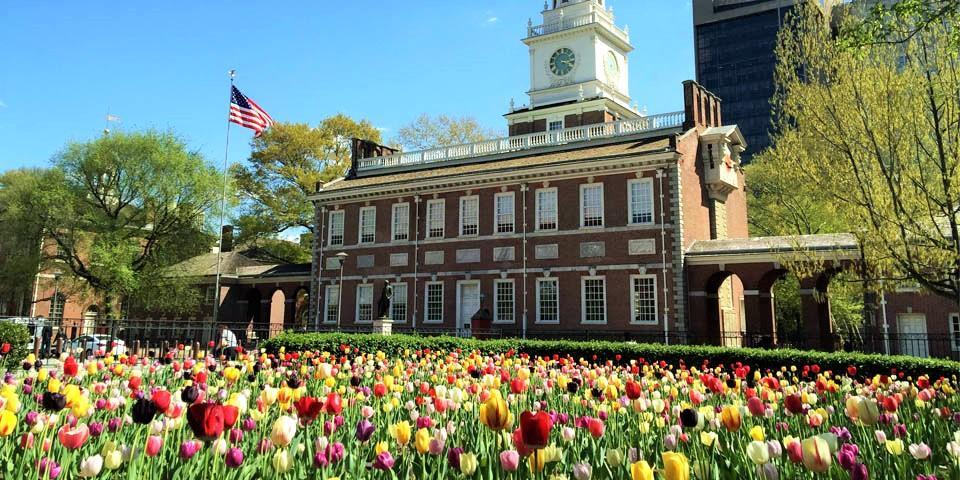 Philadelphia, PA - Here’s a look at the 16 top historic attractions in the City of Philadelphia - From the Independence Hall to Museums from the founding of our great country and its cultural identity. Come Visit Philly's History!

1. Betsy Ross House, where the upholsterer is credited with creating the nation’s original red, white and blue banner. Appearances by Betsy herself and the freed slave Phillis, who toils away in the laundry room, depict the life of a working colonial woman. 239 Arch Street, historicphiladelphia.org

2. Independence Hall, the spot where in 1776 delegates from the 13 colonies gathered and adopted the Declaration of Independence to break away from British rule. This spot is also where the U.S. Constitution was debated and adopted in 1787. 5th & Chestnut Streets, nps.gov/inde

3. The Liberty Bell, home to the cracked but mighty Bell that has served as an international symbol of freedom. A short film available in English and eight other languages traces how abolitionists, suffragists and other groups adopted the bell as a symbol of freedom. 6th & Market Streets, nps.gov/inde

4. Congress Hall Philadelphia, the meeting place for the first Congress and the site of George Washington’s and John Adams’ presidential inaugurations. Visitors learn how the House of Representatives and Senate came to be called the “upper” and “lower” houses. 5th & Chestnut Streets, nps.gov/inde

5. The National Constitution Center, the place to learn about the most influential four-page document in U.S. history. Hands-on activities, artifacts and a powerful multimedia production delve into the roles, responsibilities and evolution of the nation’s three branches of government. 525 Arch Street, constitutioncenter.org

6. Benjamin Franklin Museum, all about the life of the man who signed the Declaration of Independence and helped shape the U.S. Constitution. Interactive exhibits and computer animations reveal how his accomplishments as a printer, inventor, scientist and international diplomat influenced the creation of the American form of government. 317 Chestnut Street, nps.gov/inde

7. The President’s House Philadelphia: Freedom and Slavery in the Making of a New Nation, an open-air venue that explores the paradox of slavery and freedom at the nation’s first executive mansion. Videos tell the stories of Hercules, Only Judge and the other enslaved people who served George and Martha Washington. 6th & Market Streets, nps.gov/inde

8. Second Bank of the United States, re-opened in 2016 after a massive renovation. The exhibit here traces the development of the nation through portraits of George Washington, Alexander Hamilton, signers of the Declaration of Independence and U.S.Constitution and other significant figures in America’s history. 420 Chestnut Street, nps.gov/inde

9. Philadelphia's Olympia War Ship, the world’s oldest surviving steel warship still afloat. This ship led the first victory at sea during the Spanish-American War and was Admiral Dewey’s flagship during the Battle of Manila Bay. The admiral’s quarters, sailors’ sleeping hammocks, gun turrets and other artifacts offer a glimpse into life at sea during the 19th century. 211 S. Columbus Boulevard, phillyseaport.org

10. Philly's African-American History in Philadelphia, celebrating its 40th anniversary in 2017, explores the lives and contributions of people of the Africa Diaspora. In addition to topical and artful temporary exhibitions, the permanent Audacious Freedom traces the experiences of African-Americans in Philadelphia from 1776 to 1876. 701 Arch Street, aampmuseum.org

12. Philadelphia History Museum at the Atwater Kent, where artifacts dating from the 17th century to the present tell the stories of new Americans. Here visitors can discover Philadelphia in miniature on the world’s largest map of the city. 15 S. 7th Street, philadelphiahistory.org

13. Historical Society of Pennsylvania (HSP), an essential resource for anyone searching for information about the history of Pennsylvania and the lives of the people who live here. With more than 21 million printed and graphic items in its collection, the HSP is a premier center for the documentation and study of ethnic communities and immigrant experiences. 1300 Locust Street, hsp.org

14 Philadelphia United States Mint, brainchild of Secretary of the Treasury Alexander Hamilton and approved by Congress in 1792. Money is made still in the Historic District’s modern descendant of the original Mint building, which offers a video and free, self-guided tours. 151 Independence Mall East, (215) 408-0114, usmint.gov

16. Museum of the American Revolution, the newest addition to the oldest part of the Historic District. This museum houses a discoverable archive of artifacts from the battles that made the war that created the United States of America. Some standouts: General Washington’s headquarters tent, Patrick Henry’s law books and rare arms from both sides of the struggle. Open April 19, 2017. 101 S. 3rd Street, (215) 253-6731, amrevmuseum.org