King of Prussia, PA - Chefs are the rock stars of the 21st century (or at least this part of it.) It doesn’t even matter where they’re doing it. I’ve watched street food shift from a blue collar staple to a respected culinary endeavor. Last year, Michelin awarded its coveted star to two noodle stalls in its inaugural Singapore edition. This isn’t a fad, either. It’s evolution. We’re in the middle of a food truck revolution, and that makes it a great time to be a foodie. 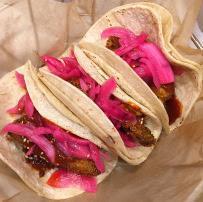 Successful food trucks sometimes expand to more trucks, carts, and kiosks. What happens when it’s time to expand into a less mobile venue? When Taco Truck hit this milestone, they looked hard at what went into their success and distilled it down to its four core principles: authenticity, hospitality, sustainability, and community. I had a chance to try out the formula in January, when they opened their newest location in King of Prussia’s “Savor” food court.

The menu leans hard on “authentic”, and it shows. This isn’t Taco Bell, and it’s not Chipotle. They’re not trying to overwhelm anybody with volume. The food is not expensive (entrees are mostly under $10), and the portions are reasonable. The standout for me was the Berenjena Torta with their chipotle sauce. It’s a hot crispy eggplant sandwich, with white onion, pickled jalapeno, avocado, crema, and black beans. Add their signature chipotle salsa, a dark, smoky, medium-heat salsa and it will make your day. The only thing that could have made this any better would have been a jar of the salsa to take home. They’re working on it.

You can follow Taco Truck on Twitter (@thetacotruck) to keep up with their moving targets, or check them out at thetacotruck.com to find them near you.