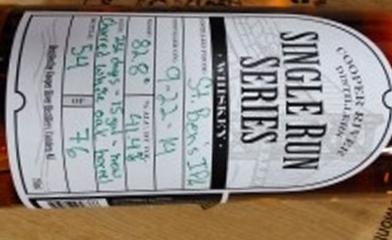 In case you're searching for a bourbon refinery in downtown Camden, NJ, you might not have a hard time discovering it. Housed inside what was previously an auto repair carport on fourth road, chief distiller and proprietor James Yoakum's distillery, Cooper River Distillers, doesn't have a tremendous sign out front, yet venture inside, and the sweet fragrance of maturing liquor will pull you in.

At the point when distiller James Yoakum says small bunch bourbon, it isn't publicizing buildup. Truth be told, the main legitimate refinery in Camden – and just the second recently authorized refinery in New Jersey since the nullification of Prohibition – practically makes darn little bunches of everything.

The whole small batch run of Cooper River Distillers' Garden State Rye Whiskey was only 84 bottles, pulled from a solitary 15-gallon barrel. The little barrel was quickened maturing with more wood and char contact, which means it spent only a year in the barrel. Another second batch is resting yet won't be accessible available to be purchased until June.

The Wharton Business School graduate, is now stranger to whiskey growing up in his home state of  Kentucky. Yoakum, anticipates his own whiskey to become of age sometime around 2017, he's truly satisfied with his coppery-chestnut rye, the first and original pure  American bourbon whiskey.