Imperial Inn (146 N. 10th Street, Philadelphia, PA) - I gave up on trying to find a decent dim sum restaurant in Philadelphia when I was in college. see... Chinatown Philadelphia 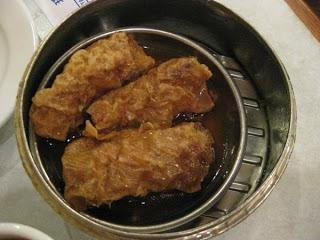 In retrospect, my lack of success probably had something to do with the fact that I was in my "vegetarian phase" as my mother now calls it--all fourteen years of it, to be exact--and the fact that there is pork or shrimp (or both!) in just about everything on a dim sum cart. Then again, none of the other members of the tribe at dinner that night had enthusiastic recommendations--except my friend, who recommended Imperial Inn.

Imperial Inn is one of those Chinatown haunts that I've walked by for years. It's got a huge, ugly awning that's hard to miss. But on New Years Day, I finally stepped inside. There I found the stereotypical 1970's Chinese restaurant decor, which I have a certain nostalgia for since it reminds me of my family's favorite place, Yen Ching, in Portland. Hart Family legend has it that my mother craved their Bum Bum Chicken while I was in utero. Apparently, even as a fetus I preferred spicy food.

Imperial Inn serves a wide selection of standard dim sum dishes as well as a few dishes that were new to me. Among the latter was "white soup," which I now know is congee, a rice soup or porridge made in many Asian countries. The rice is overcooked with excess water to produce the desired consistency and seasoned according to regional preferences. Imperial's was simple but savory: cooked in a light meat broth with flecks of pork and topped with green onion and some decidedly western-style croutons. It comes as no surprise to me that congee is Asian comfort food and in China the soup is considered therapeutic for people when they're feeling under the weather. Let's just say it was perfect for New Years Day. 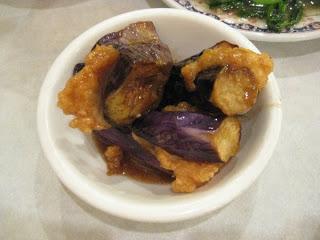 The standard dim sum dishes at Imperial were quite done well with a few exceptions. Among my favorites was the shrimp and eggplant dish: lightly battered and fried shrimp were nestled in slits made in Chinese eggplant cut at diagonals, which made for a sharp presentation. Served in a sauce of ginger and soy it was the perfect balance of sweet and savory. The Chinese broccoli with garlic sauce was fresh and not overcooked, the sauce flavorful but light enough for the flavor of the greens to come through. The scallion balls--with pork, but of course!--were as good as any version I've had.

The pork and shrimp shumai, however, was not a winner: the could-be treifelicious combo was a bit tough and not especially moist. Ditto on the pork wrapped in tofu "skin", which was a shame since the light layers of soy used to wrap the pork did have a really nice and unique texture. For dessert, my dim sum date and I had sesame balls, which are my favorite Chinese dessert: made of glutinous mochi rice paste and covered in sesame seeds and fried, they always have a rich, nutty sesame taste and just a hint of sweetness. And they're always filled with sweetened red bean paste, which is good but nothing to write home about--expect at Imperial, I discovered, where they fill their sesame balls with a mixture of sweetened white bean paste and coconut. Coconut and sesame, together at last! Shit, I'd go back just for those sesame balls.

All in all, Imperial was good enough that I kept eating well after I felt full, which goes against my modus operandi of eating.